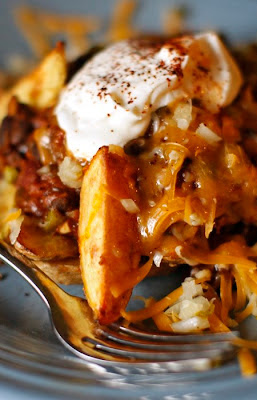 The Chubby Vegetarian found himself at the LaGaurdia Ariport with an hour to kill before the flight boarded and an rumbling in the stomach that just wouldn't quit. The pickings were slim at the Northwest Airlines' end of the terminal, so we found ourselves sitting at the "Fox Sports" bar surrounded by unhappy air-travelers shoveling unhealthy food into their mouths. I actually saw a guy wince when his server put his plate of nachos in front of him. When in Rome. I ordered a draft beer and some spicy waffle fries. The wife ordered a bowl of meaty chili and a diet coke. We were on vegetarin health-food detox after four days of local, organic, vegan food. I handed the wife a french fry which she dipped into her chili. The beer, chili, and fries did the trick. The rumbling stopped, and TCV was suddenly very, very sleepy. 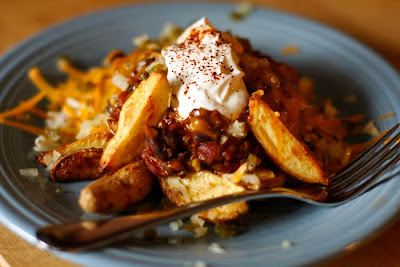 This experience got TCV to thinking; junk food doesn't have to be junky and delicious bar food can be healthy if it is done right. So, I tossed some fingerlings in less oil than you'd put on a salad and stuck them in a 500 degree convection oven to brown, whipped up some homemade chili that employs chopped mushrooms as a stand in for meat, chopped some onion and picked jalapeno peppers, shredded some low-fat cheddar, returned my seat back to the up-right and locked position, and prepared for culinary take-off. A mound of potatoes topped with chili, cheese, and all of the fixins is a great meal, and prepared this way it'll keep you from having to buy two seats for yourself next time you fly.
Posted by The Chubby Vegetarian at 10:57 AM

Oh my, I'm eating my healthy salad at my desk right now, and totally wishing it was your healthy junk food fries! I love fries topped with chili and vegan cheese!