Our Southern Vegetarian Cookbook has arrived! 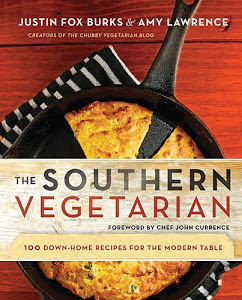 CONTEST CLOSED: Bre H., you are the commenter who won a book! Please message us through FB with your address. We chose the winner via random number generator tonight. Thanks, everyone, for the comments!    -TCV

Our cookbook is being released in May, and we're ready to celebrate! This really is exciting stuff. So many folks helped us get to this point, and we're so grateful for that. We can't wait to hear your responses once you have the book in your hands.

Keep an eye here and on FB for news about upcoming events and book signings. And take a minute to comment below and tell us what ingredient, recipe, or meal is a favorite in your kitchen in order to be eligible to win one of the first cookbooks! We moderate comments, so we will post yours once we read it -- don't worry if it doesn't show up right away.

(One winner will be chosen by random number drawing on Monday night, 4/29/13; cookbook, signed if you wish, will be mailed to your U.S. address.)

Posted by The Chubby Vegetarian at 5:03 PM 81 comments:

Whether it's made with leftover Indian food from our favorite spot or the last serving of a homemade curry or masala, I find myself eating some version of a curried burrito quite often. It sounds like it would be a strange cultural mash-up, but it actually works really well -- this version made with masala-spiced chickpeas is really good in particular. Think of the whole-wheat tortilla as really flexible naan bread, and think of this dish as a portable Indian buffet. 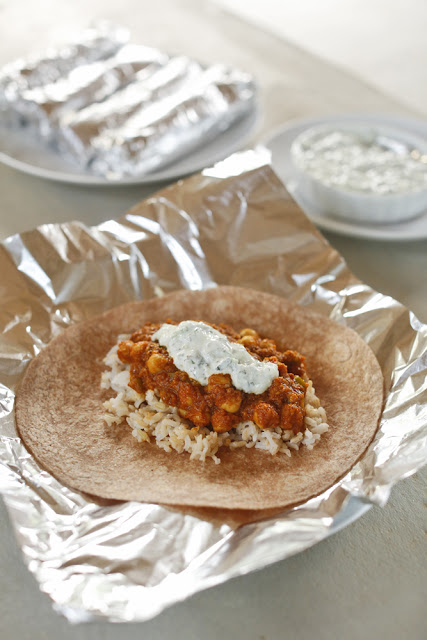 Some of our favorite Indian foods are fried or laced with full-fat yogurt, lots of ghee, or coconut milk, but chana masala is relatively healthy. It's a simple tomato sauce with chickpeas that only contains a little butter. Slate called chana masala "nutritionally unimpeachable." I think I'd have to agree. This version happens to be portable, too!

Into the work bowl of your food processor, place the onion, garlic, ginger, tomato, masala, curry, coriander, vinegar, fenugreek, and sugar. Blend until well incorporated. Place a large skillet or wok over medium-high heat and add the butter. Once the butter is melted, add the paste from the food processor. Cook uncovered and stir occasionally until the mixture has reduced and is thick; this should take about 15 minutes.

Add the pepper, chickpeas, and salt to taste. Reduce heat to low and cover for about 10 minutes. Add broth or water to achieve a spaghetti-sauce like consistency. Serve rolled into tortillas with jasmine rice and Cucumber-Mint Raita. (Makes 6 burritos.)

In a medium bowl, mix the yogurt, cucumber, mint, and salt until well incorporated. Set aside in the fridge until ready to use. (Makes about 1 1/2 cups.)

Posted by The Chubby Vegetarian at 7:32 PM 8 comments: 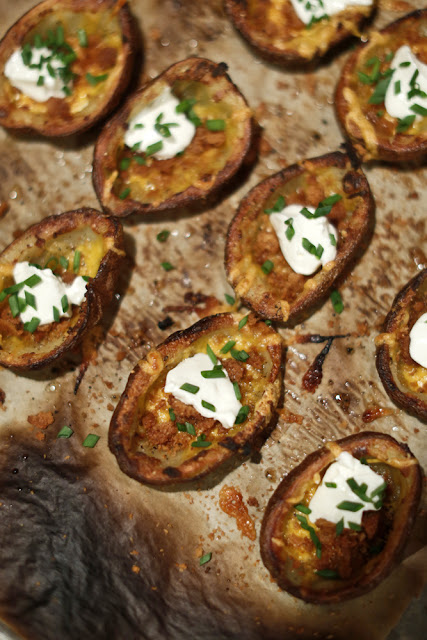 Once we went here with a good friend to hang out with his friend that we hadn't met until then. Isn't that always a funny situation? Meeting your old friend's new friend always promises sort of an awkward time. You don't really know the person at all, you attempt to pretend to get to know this person that you may never speak to again, and you and the new friend both are busy asserting your friendship with the connecting friend in a pretty much territorial way. What usually happens after such an occasion could go one of two directions:

A) Later, your friend gives you some weird reason why you all had to join in on this in the first place.

B) You must hear at length why the friend is awesome; isn't he great? Don't you think so?

Hopefully, during such occasions, at least there's some food to distract. One thing that could be ordered to be vegetarian at this particular establishment where our fateful meeting took place was the potato skins. Total bar food, but good, so we wanted to make these our own. We tamed them with coconut bacon -- and no frying allowed, of course! -- and they are going to be hard to resist making again every week now.

Make the Smoked Coconut Bacon according to the recipe. Preheat the oven to 350 degrees. Place the potatoes cut-side-down on a parchment lined baking sheet and brush the skins with half of the canola oil. Bake for 30 minutes. Place the warm potato halves one at a time into a clean kitchen towel and scoop out the meat of the potatoes using a spoon. Reserve the insides for another use.

Season each potato skin with salt and pepper and divide the cheese among the skins. Place under the broiler until the cheese is melted and the edges of the potato skins are deeply colored. Garnish the skins with equal amounts of the smoked coconut bacon, sour cream, and chives. (Serves 2 as a main dish or 4 as an appetizer.)

Posted by The Chubby Vegetarian at 9:17 PM 5 comments:

This is another entry in our vague, occasional series of really easy and delicious veggie burgers. The truth is, if you add equal parts of quick-cooking oats to mashed beans or sweet potatoes or squash (or whatever), it will yield a workable mixture that is well-suited to be formed into a burger patty. All you need to do from that point is add a little seasoning. Genius! 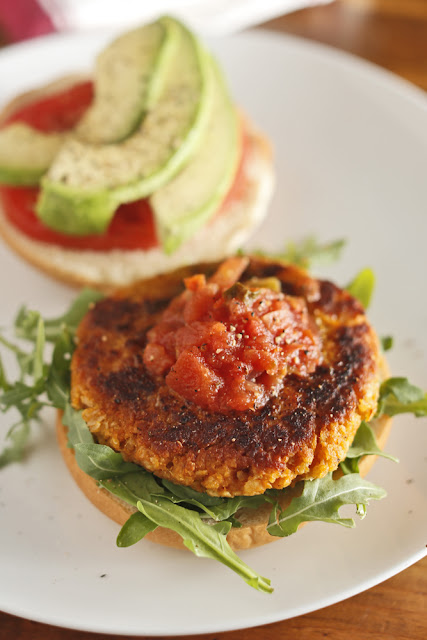 Just to be clear, these are not the kind of burgers that are meant to taste like ground beef. We are not huge fans of those types of things. These particular burgers taste like roasted sweet potato, smoked chilies, and cumin. It's a great combination of smoky, spicy, and sweet -- especially paired with rich slices of avocado and some tangy salsa.

In a large bowl, mix the mashed sweet potato, oats, cumin, garlic, salt, pepper, and chipotles until well incorporated. Cover and set aside in the fridge for 15 minutes to allow the moisture to distribute. Form mixture into 4 patties and pan-fry over medium heat in a little canola oil  for about 4 minutes per side. Serve on a Kaiser roll with slices of avocado, tomato, arugula, and salsa. (Serves 4.)

Posted by The Chubby Vegetarian at 8:48 PM 28 comments:

After diving into this dish for lunch today, we immediately decided that we could eat it just about every day. It was obvious to us from the first bite that baked avocado tacos are something great to behold. The avocado becomes very savory when it's baked, and its typically cool, creamy texture becomes meaty and rich. We loved them with the slaw and black beans, but you can dress them up any way you like. 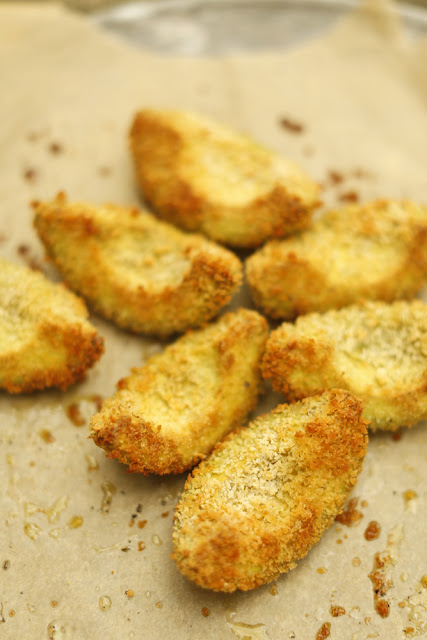 When selecting avocados for this, look for ones that are just ripe and still a little firm. You'll have a hard time working with an avocado that's too soft. Also look for the Haas variety with the dark pebbly skin. The smooth, lighter green avocados contain too much water to be used in this recipe.

These would be just as good (read: maybe even better!) pan-fried -- or dare I say it,  deep-fried -- but as always, we try to look for a balance of flavor and fat. The panko bread crumbs give the avocado a satisfying crunch without the deep fryer. 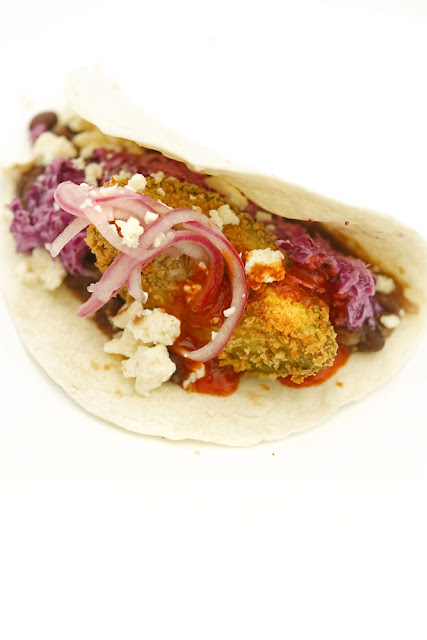 Preheat the oven to 425 degrees. Set up a 3-bowl system for coating the avocado quarters. In the first bowl, mix the all-purpose flour, salt, granulated garlic, sage, and black pepper. The second bowl should have the beaten egg and the water mixed until smooth. The last bowl should have the panko bread crumbs.

Dip each avocado quarter into the flour, and then the egg, and then the panko to coat. Place them on a parchment-lined baking sheet. Once all quarters are coated, drizzle them with the canola oil and place them in the oven for 20 to 25 minutes, turning them halfway through, or until they are nicely browned.

In a large bowl mix the cabbage, lime juice, sugar, sour cream, salt, and pepper together until well incorporated. Makes about 1 1/2 cups.

This is our typical weekend breakfast. It's not always this particular flavor combination -- we do the same thing with mushrooms, sage, and manchego;  sun-dried tomato, spinach, and ricotta; or sweet potatoes, chipotle peppers, and cotija. The variations are endless, but the method is always the same. When you have a little extra time to cook in the morning, give this tortilla a try. 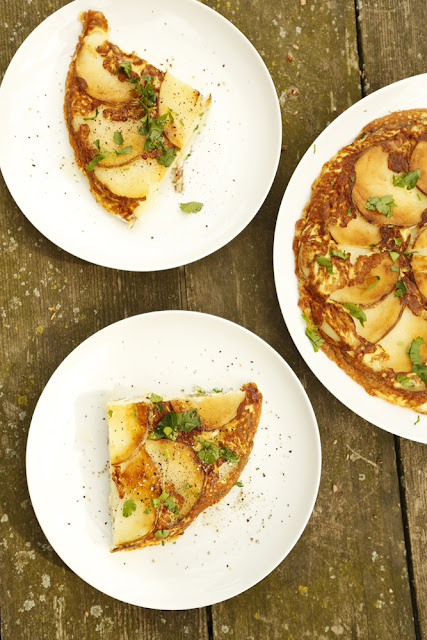 Preheat the oven to 350 degrees. Fill a 10-inch frying pan half full of water and bring it to a boil over high heat. Add a teaspoon of Kosher salt to the water. Blanch the greens in the water for 15 seconds and remove using tongs. Allow greens to cool, squeeze them dry, and finely chop them. Set aside.

In the same water, blanch the potatoes for 3 minutes. Strain and set potatoes aside on a plate to cool slightly. 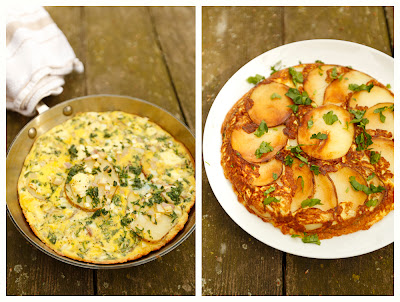 In the same 10-inch frying pan over medium-high heat, heat the olive oil until it shimmers. Carefully lay the potato slices in the oil and cook for 3 minutes. Pour the egg mixture over the top and place the pan into the oven for 15 minutes or until the eggs have set.

Using an oven mitt, remove the pan. Please remember that the handle will be really hot! Loosen the edges with a butter knife and tap the pan on the countertop to help loosen it. Invert pan onto a plate and garnish with parsley and truffle oil.

Posted by The Chubby Vegetarian at 2:25 PM 2 comments:

This is always a good call for dessert. It's light compared to, say, a slice of cheesecake, it's simple, and it's warm and satisfying. Mango-lime sticky rice always rests upon that fine line between sweet and savory, and with the addition of a little spicy and vinegary habanero sauce, it blurs that sweet/savory line even more. Mango-lime sticky rice is a classic Thai dish, so it seemed only natural to add some heat and make things interesting!


*However, please be warned: habaneros range from very mild like a jalapeño to off-the-scale Scobal units five-alarm -- so don't hurt yourself! We were given some very tame and fruity ones that a friend grew this summer, so they worked well for this sauce but still packed a punch. 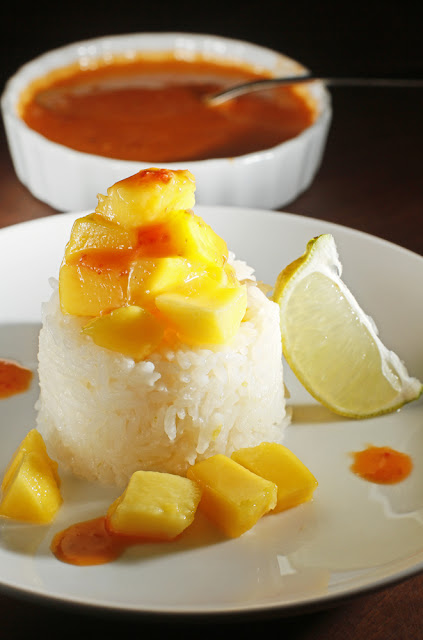 
Bring the water, sugar, salt, and zest to a boil. Add the jasmine rice, cover, and reduce to a simmer. Allow rice to cook undisturbed for 20 minutes. Fluff rice with a fork and add the lime and honey. Stir to incorporate all ingredients. Serve about a 1/2 cup of rice with about 1/3 cup mangos. Garnish with a lime wedge and a drizzle of habanero hot sauce.


Blend ingredients in a blender until smooth. This will make much more than you need, but it's a great addition to soups, rice dishes, sandwiches, and, um...desserts.