I Brought Pizza to a Pizza Joint 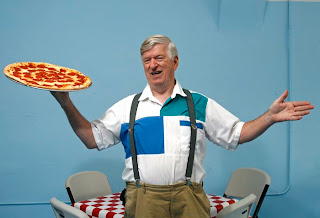 That's right. Much like bringing ice to an Eskimo, I delivered one of my pies to Lou at Lou's Pizza Pie on Young Ave in Memphis, TN. Lou and I talk pizza all the time, and we share many of the same pizza philosophies. We agree that the perfect pie should be a zen-like balance of crust, cheese, and sauce. The crust should be thin & crispy with a chewy center. Too much cheese and you end up with a greasy mess. Too much sauce and you end up with a molten cheese-a-lanche as everything north of the sauce slides off with the first bite. Balance folks, balance. I was telling him about my beer-bread crust, and he made the mistake of saying that he'd like to try it sometime. Fast forward a few weeks, and I show up at his doorstep with one of my pies. I had par-baked it in my oven, and then stuck it in the freezer when it was about half cooked. Lou took the pie from me and popped it into his REAL pizza oven. While my pie baked, we sat and chatted about the week he spent in NYC eating nothing but pizza. A week in NYC eating nothing but pizza for breakfast, lunch, and dinner -- that is the kind of research The Chubby Vegetarian could get into.
Though my pizza got a little too done in the REAL pizza oven, Lou still seamed to enjoy it. We tore into the pie as we discussed the finer points of making a pizza sauce, and the pros & cons of adding whole-wheat flour to a crust recipe. I sipped on a Sam Adams, and Lou pounded a Red Bull as it came down to the last slice. It was time for me to cut out. 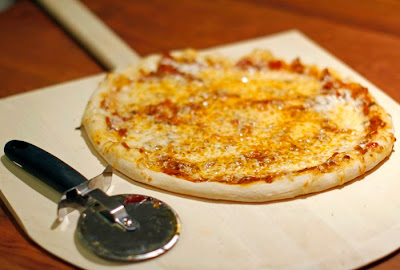 For those who have not tried Lou's Pizza, he has a unique signature-style pizza that is really, really delicious. He uses a little bit of whole wheat in his crust and the sauce goes on top of the cheese on a pinwheel design. His pizza is a few bucks more than other places, but you get a superior pie. I have eaten a lot of pizza in my time, and Lou's is at the top of the list. Drop in and try it out. I think you'll love it.
Posted by The Chubby Vegetarian at 1:33 PM

I love Lou's Vegan Pie!!! Yea for Lou's! And how funny that the pizza man should request to try your pie. Of course, it looks like you're kinda the pizza man too. Ya'll should have a pizza contest to see who makes a better pie!

Thanks for the great picture and glib about Lou. Can I steal your picture of Lou for Lou's website? I'll give credit and a link back to your spot? Just email pie at louspizzapie.com.