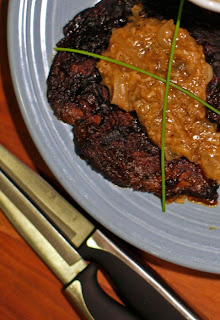 Welcome to Chubby's Steak House. We don't often get to break out the steak knives, but we needed them tonight. This dinner was inspired by the ginormous portobello mushrooms I found at the Winchester Farmer's Market this weekend. The sauce was inspired by a dish I had in NYC at Kate's Joint. They called it "Fake Steak Au Poivre," which is French for pepper steak, I think. The best part of the Kate's dish was the gravy. It was a spicy, peppery, brown gravy with tons of fresh horseradish served on top of sliced mushrooms and fried tofu. I went tofuless for my version and served my take with some fun smashed potatoes, side salad, and creamed spinach.
For the mushroom marinade:
1/2 cup roasted tomatoes
4 cloves of garlic
1 shallot
1/8 cup balsamic vinegar
1/2 cup olive oil
salt & pepper to taste
Place all ingredients except oil into a food processor and blend until smooth. While the processor is still on, drizzle the olive oil in slowly. You want to leave the food processor on until the marinade emulsifies. You will know when this happens. It will thicken and lighten in color. Coat the mushrooms with the marinade you just made, cover, and stick in the fridge for a few hours.
For the gravy:
1/2 cup horseradish (finely grated)
1/2 small onion (cut into half moons)
2 tablespoons plugra butter
1 teaspoon olive oil
1 tablespoon flour
1 cup vegetable stock
cracked pepper
Over medium heat, melt butter and oil until it stops bubbling. Add the flour, stir constantly, and cook until it turns the color of an old penny. Add the horseradish and onion and cook until translucent. Add pepper. Add stock and allow to thicken. The horseradish will mellow and become sweet as it cooks, much like garlic does. 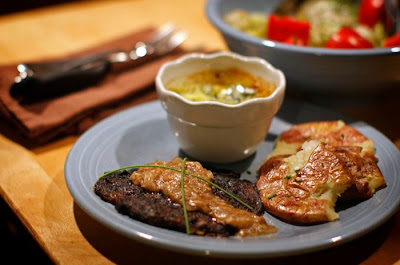 Now grill those marinated mushrooms on a hot grill until you get some nice grill marks on them. Finish cooking them while covered in a hot oven. Place the mushroom on a plate and spoon about 2 tablespoons of the gravy on top. Get out your steak knives and dig in. Who says vegetarians can't have steak?
Posted by The Chubby Vegetarian at 9:06 PM

Of course, only you can make portabello mushroom steak look good in a picture. How'd you get the edges to look steak-ish? When I made one earlier, the edges were rounded and it looked silly in pictures.

Oh, and I forgot to mention that I love the new banner!

I cook 'em on a hot fire and then stick'em in the oven. I like my steak well done. They flatten out like you see in the picture.

"The Wife" did the drawing for the banner. She is a good artist.

This looks absolutely awesome!! I'm part of a vegetarian coop at my college, and was dying to find something that went well with the butternut squash mashed potatoes I make, and this looks like it'll go perfectly!