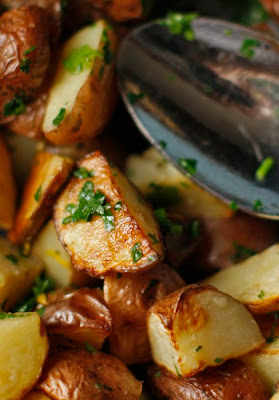 Here are a few quickies for you. TCV knows that sometimes it is harder to figure out what to make as a side-dish or dessert than it is to figure out what you want to make as your main course. So here are two suggestions. Instead of frying or mashing those potatoes do something more interesting and flavorful (not to mention more healthy) with them. Quarter some new potatoes, toss them in a little bit of olive oil, and then place them on a non-stick baking sheet. Roast in a 5oo degree oven until golden. While they are still warm from the oven, toss the potatoes with a handful of chopped parsley and the zest from one lemon. Add salt and pepper to taste. There, now you have yourself a delicious and healthy side of potatoes that will go with just about anything. 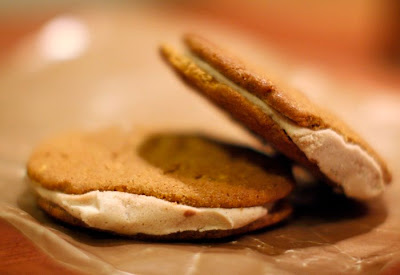 My mother-in-law baked me some really moist and chewy peanut butter cookies. Isn't she sweet. So I immediately woofed a few down with a cold glass of milk, and then I decided the save the rest. Later, The Wife and I made some homemade chocolate ice cream, and sandwiched the ice cream between two of the peanut butter cookies. We wrapped the ice cream sandwiches in waxed paper and stuck them in the freezer to get a bit more solid. The next night we had them for dessert, and let me tell you they were fantastic. It tasted like a giant frozen Resse's Peanut Butter Cup.
A few notes:
We are now on Veg Blog Search. It is a search engine that helps the veggie among us find what to make for dinner. Check it out, and root around for a while. You will find some great recipes.
This week Rose Panieri of The Herald News of suburban Chicago gave the The Chubby Vegetarian a mention in a column called Lost & Found. Check it out here: Lost & Found
Posted by The Chubby Vegetarian at 8:16 AM

You're killing me here :)

OMG! I want one of those cookie sammiches. Like bad. I borrowed my mom's ice cream maker a few weeks ago, and I've got the baking bug...like I NEED to make cookies.

On the potatoes, yum! So simple. So delicious.

I love the potato photo - I agree - so much better when roasted. (try telling that to the Brit I live with)

Congrats on the nod in the article - well deserved as this is a great blog.