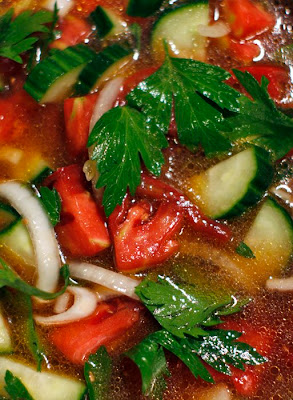 During the summer, there is one thing that my grandmother, Biee, kept on hand in the fridge...summer salad. For you yanks or unknowing-southerners, this is a salad consisting of tomatoes, cucumbers, & onions floating in vinegar, sugar, water, & oil. Biee's summer salad was so sweet some might have called it dessert, but I called it my favorite snack -- especially on a hot summer day.  I can still remember rooting around in the fridge looking for the light-green tupperware with the white top that held all of summer's bounty. I'd stick my chubby little fingers in there and fish out the best looking tomatoes while no one was looking. This salad is crisp, flavorful, and delicious. I updated this classic with heirloom tomatoes, white balsamic vinegar, & whole parsley leaves.
For the salad:
1 part tomatoes (cut into chunks)
1 part cucumbers (cut into chunks)
1/2 part sweet white onion (thinly sliced)
1 handful whole flat-leaf parsley leaves
For the dressing:
1 part white balsamic vinegar
1 part water
1/2 part olive oil
1/2 part sugar
salt to taste
Throw the tomatoes, cucumber, onion, & parsley into a bowl. Make enough dressing to cover, then pour over the top of the salad. Let stand in the fridge until you are ready to eat it. Serve in a bowl. No lettuce required. 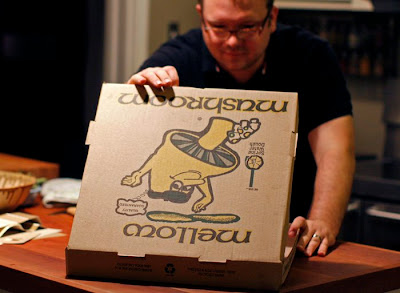 If you look through the posts on The Chubby Vegetarian, you will notice that I'm nutty about two things: tomatoes & pizza. I called my brother yesterday to check in with him as he had been out-of-town for the weekend. He said that he'd have to call me back because he was passing through Nashville, and was about to order a pizza from  Mellow Mushroom. I began to salivate like one of Pavlov's mutts. Before I knew it, I had convinced him to order me a large cheese pie and bring it back to Memphis with him. The wife flatly refused to eat a pizza that had traveled such a long distance without refrigeration, but I did not mind. Mellow Mushroom produces some of the finest pizzas I have ever tasted. They just get it. The crust, the sauce, the cheese are all damn near perfect.
Posted by The Chubby Vegetarian at 9:26 PM

Here's to Pavlov's muts! Hey, there are some things we love and love often. For me it is dates.

Heirloom are perfectly in season right now...yum yum to your salad.

My husband had never had summer salad until he moved to Texas. He is from the East Coast. He loves summer salad.

Ha! We made the same thing! Great minds, great minds...my mom always keeps a bowl in the fridge too!

On Mellow Mushroom, I freakin' LOVE it! They tofu and tempeh pizzas (I just skip the cheese...they're "soy cheese" is not vegan). My boyfriend lives there, and honestly, I just don't eat there often enough.

It's funny that Amy wouldn't eat anything that had traveled that far. I often get my groceries at the Whole Foods in Nashville and cart them all the home. So far, nothing's gone bad.

no way for me. i have had food poisoning recently and i will not risk it again. it's awful! but i LOVE mellow mushroom pizza, so it was sad. i may have to go to fayettville, arkansas for it; we heard there's a MM there...