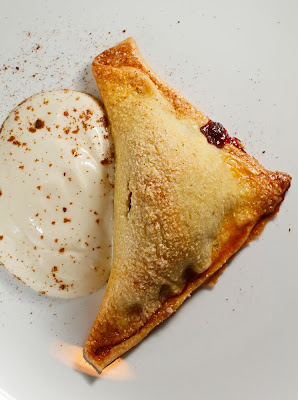 It's nice when something just comes together without a ton of effort or planning. Take these blackberry hand pies; they were something we always wanted to try, so we included them in an end-of-summer, no-utensils-needed dinner. Old-fashioned in the best way, these mini pies had the same feel of the original kind, just without any frying happening.

Put the first four ingredients in the food processor. While it is running, drizzle in the water until the crust comes together and spins around the sides. Wrap it up in plastic and put it in the fridge for a couple of hours.

Put it all in a saucepan and cook on medium heat for 15 minutes. Let mixture cool and put it in the fridge.

Roll out the dough to 1/8-inch width using just a little flour on your surface and rolling pin. Cut 4-in squares. Spoon about 2 tbsp. of the cooled blackberry mixture in the middle of the square. Whisk up an egg yolk with a little water and brush it on two edges of the square of dough. Fold the dough over to make a triangle and pinch the edges together tightly. Brush the pie with the egg wash and sprinkle sugar over before baking a tray of them at 350 degrees for 30 minutes or until golden brown. (These can be served with ricotta mixed with honey for extra richness.)

Posted by The Chubby Vegetarian at 8:37 PM

This recipe looks fab! I'm finally getting the hang of making pie crusts and this looks fun. Thx for sharing!