Why did I shrink away from marmalade in terror as a kid? It seemed like the yuckiest flavor of all; obviously, grape was a very close second. Twenty-plus years have passed, so maybe it's time to give orange marmalade another try.
We started with a recipe from a great little black book called The Basics, which covers just about every technique a home cook should master, from infusions and classic sauces to sabayon and even foams. (Right -- like we're going to start foaming things...but hey, you never know!) 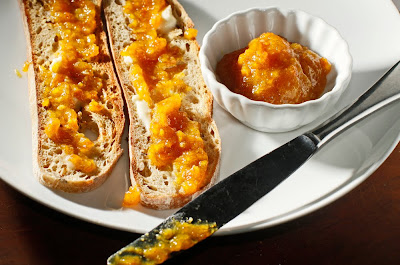 Orange Marmalade
4 organic, unwaxed oranges (since you will be using the peel)
1 cup water
1/2 cup cane sugar
half of a vanilla bean
Cut off a little of the top and a little of the bottom of the oranges. Next, cut the peel completely away, but save it. Now you will need to cut away the membrane and pith, so go on and check out this video on how to supreme an orange and then put your handiwork into a saucepan. Cut all the white pith away from as many pieces of orange peel as you can bear; this is boring and will put you in a trancelike state, so be ready for it. Put the thin peel into the saucepan and add the water. Add one-half of a vanilla bean. Cook the mixture on medium-low for an hour. Mix in the sugar and cook it all for another hour until it is reduced and not watery. Let it cool and then scrape out the inside of the vanilla bean into the mixture. Put it in your food processor and pulse until it looks like jam.
Freeze it for later or use it the week you make it. (Our brother-in-law suggests going the classic route with the marmalade, no dilly-dallying around, by just slathering it on some properly buttered toast.)
Posted by The Chubby Vegetarian at 2:00 PM