Below is an essay by my close friend Aaron Brame. We spent a recent Sunday afternoon in my kitchen learning some treasured family recipes from his mom. In the coming weeks I will share those recipes with you in celebration of Mother's Day.
I may have lived nearly all my life in the South, but I have never eaten like a southerner.

My mother taught me all that I know about cooking and food, and she learned in the kitchen of her parents and grandparents in Jeannette, Pennsylvania. Jeannette is a grimy, industrial suburb of Pittsburgh that once boasted the largest glass factories in the world. Immigrants actually left New York City for Westmoreland County, where they could find work at the Jeannette Glass Company. Early in the twentieth century, following fateful meanderings around the globe, my family ended up there. They had dug up their tomato gardens in Calambria, Italy, and transplanted them in the hills of Jeannette. 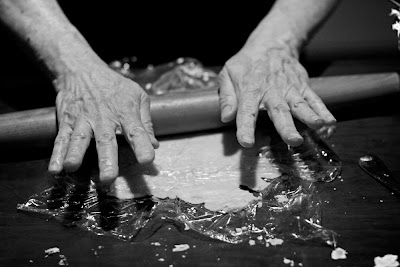 By the time I was old enough to understand this, most of these Italian relatives were either dead or living far away. I know their names and had seen their black-and-white faces in old photographs, but those didn't mean anything to me. Campania was as about as remote as Jeannette must have seemed to the generations before mine. But as it turned out, we had a lot in common. We shared my mother, my grandmother, and food. I didn't know it, but I was more Italian than I was southerner.

When I first moved to Memphis at the age of nine, I found the practice of eating barbecue ribs with baked beans and cole slaw to be the depths of bad taste. We didn't eat such things. We liked zucchini, fried eggplant, gnocchi (pronounced nuh-yawk-ee), chicken parmesean, Italian spinach, pizza, Syrian pizza, and calzone. For Easter we had pizza chiena and homemade manicotti (Mom still makes her own crepes). Christmas Eve dinner was angel hair pasta with anchovies, fried fish, pizelles, and cheese fondue.

We didn't just eat Italian food, though. There were as many Poles as Italians in Pittsburgh, and much of my favorite food is Polish. We still eat kielbasa, bratwurst, perogies, sauerkraut, cabbage and dumplings, and "Polish hand grenades," cabbage leaves stuffed with ground beef and onions and sometimes covered in a citrusy glaze.

The cheese fondue may be a hanger-on from trendy 1970s cuisine, but the rest is a part of a precious family history that informs not only what I choose to buy at the grocery store, but who I am on a more important level. I didn't realize this when I was young, of course. It didn't matter to me then. Eggplant tasted good; okra was gross.

It matters more than ever now. My wife and I had our first child in 2008. We named him Rocco, a nod to the Italian heritage that grows more distant with each generation. When he was old enough for solid food, my mother instinctively made him a meal that I hadn't seen in twenty-five years—a cupful of pastine tossed in butter and a little parmesean cheese. He loved it.

Posted by The Chubby Vegetarian at 11:54 AM

thank you so much.