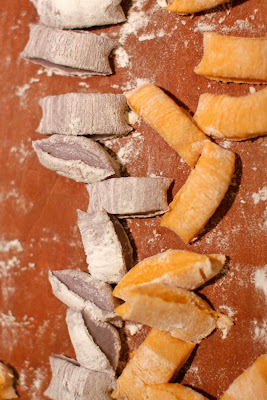 Gnocchi is both simple and complex. A recipe won't really help you much, but a primer about technique will do you a world of good. As most of you know, gnocchi are Italian dumplings made from potatoes and flour. When done properly they are light and pillowy, but when done wrong they are chewy and gummy. The difference between the two can be a few tablespoons of flour. It all depends on the potato. With that said, don't expect to get it right the first time. It is not likely to happen that way. It takes time. It takes eating some gummy potatoes to figure out what you did wrong, and change it up. Believe me, it is totally worth it.
First you must steam a peeled potato that has been cut into a large dice. Simple enough. I use a stainless steel colander inside of my largest pot that I have filled with an inch or two of water. I cover it, and wrap the top in a kitchen towel. I usually leave it on a low boil for about half an hour. Once the potato is tender, remove from the heat, and toss into your Kitchen-Aid mixer with the dough hook attachment. Run it on low for a few seconds until the potato has broken up. Add flour 1/4 cup at a time until the dough starts to some together. It will be between 1/2 a cup and 1 cup per potato depending on how much starch the potato had to start with. Once you have your dough, turn it out onto a floured surface, form it into a ball, cover it with plastic wrap, and stick it in the fridge to cool. 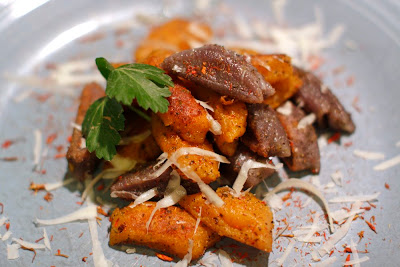 Remove the dough from the fridge and cut in half. On a floured surface, roll each half into a long snake that is about a 1/2 inch in diameter. Cut the snake into 1/2 inch pieces. You can get more fancy with the shaping of the dumplings, but I never do. Now just cook them in a large pot of salted water. You will know they are done when they float to the top. Take them out of the water, and place them directly into a pan with your choice of sauce. They go great with tomato sauce, cream sauce, or a simple butter sauce.
I made one batch using blue potatoes and another using sweet potatoes. It was so good. The sauce is simply olive oil and parmesan butter (thanks Michel & Kelly) flavored with fresh minced sage and garlic. I allowed the gnocchi to crisp in the butter sauce before plating it up. I garnished the dish with saffron flowers and a little grated parmesan.
Posted by The Chubby Vegetarian at 10:15 PM

I never thought of making gnocchi with blue potato.. but it sounds very interesting. I usually make just the traditional version of gnocchis....I must try your recipe.

wow, I have to try this one...it seems very kid-friendly; I think Amelia would love it!

Where did you get the saffron flowers? I'm so glad you love the Parmiggiano butter! Did Amy eat up all the Vosges bars or did you get to taste some?

Did you give me the himalayan salt and goji one? I ate half of it and the rest is haunting me!

THANK YOU THOSE VOSGES BARS ARE AMAZING!

I am so excited to try this out ! i have been nervous about trying gnocchi because it is such a learn as you go kind of food. I'm very impressed with your flavor pairings and use of multiple kinds of potatoes !

I agree with Alisa S: I've never tried gnocchi because I've been so intimidated with making my own pasta in general, but I think this might be a good place to start. Your dough hook technique might not be foolproof, but is definitely easier than other ones I've seen. Thanks for sharing!

Nice Blog. I prefere gnocci made by potatoes but I think it´s easier with flour.