(We are so excited to bring you this guest post by Michael Hughes of Midtown Stomp! When he made this amazing corn pudding for us this summer, we just had to have the recipe. But really, it was no surprise since we love cooking with him, and we love anything he makes. We topped the pudding with these cute little chanterelles sautéed in butter and thyme, but this dish is so versatile you could serve it with almost anything. Here is his take on a dish that you really should make soon...like, today!) 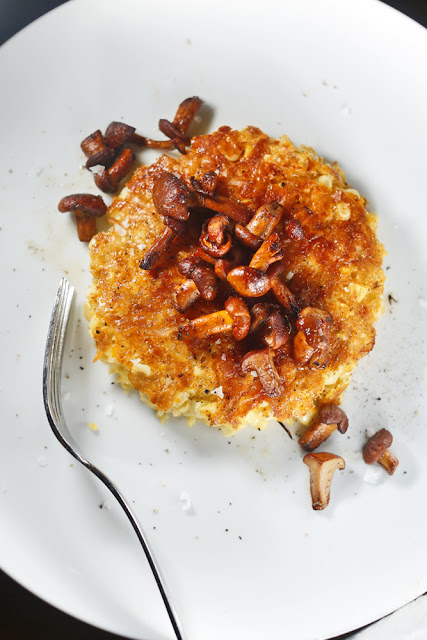 It had been far too long of a time since Kelly and I had our friends Justin and Amy over for dinner.  Some of the best times we have with them is in our kitchen and dining room -- likewise at their place. Last Friday, we planned to have dinner with them but couldn't decide on a restaurant.  I texted Justin and said, "How about our place?  I'll cook."  He responded in the affirmative. Whenever we have them over, I always use it as an excuse to have fun in the kitchen.

I remember when I was a child, my grandmother, Ta, would make a type of South American corn pudding she called "Uminta".  The first time I tried it, I did not care for it.  Then I began to have a taste for it. After she passed away, I craved it.

While at work on the day of our dinner, I settled on what I would make: a Provencal-style artichoke stew with my version of corn pudding since the corn right now is so fresh and sweet. You could make it heartier with the addition of mushrooms or fennel; with any recipe, don't be afraid to tweak it and make it your own.

Preheat the oven to 400 degrees. Cut the corn off the cob. (An easy way to catch it all is to put a small bowl upside down inside a very large bowl.) Balance the cob vertically and cut downward. Remove the small bowl. In the same bowl with the corn, scrape the cut cobs with a spoon; that will release the corn "milk" and pulp still left in the cob.  In a separate bowl, mix milk, half & half, salt, eggs, egg yolk, and melted butters.  (Note: if you don't have truffle butter just sub another tablespoon of regular butter.) Whisk it all together.  Add the flour and grits and whisk again.  Add the corn mixture and stir to combine.   Pour into a shallow, buttered (or olive-oiled) baking dish.  Sprinkle with cheese and a few dashes of paprika.  Bake for 25 minutes or until golden brown. Once cooked, let it sit for 10 minutes to settle.

Posted by The Chubby Vegetarian at 9:08 AM

Mmm wow that looks like some good veggie winter food. Can't wait to try this one. Our 3 year old loves sweet corn too so it should get the thumbs up from her as well.