If this was a Houston High School tray circa 1990 -- the second year that the school where we met was open and the first year it had a working lunchroom -- it would have a pile of dinner rolls, hash browns, and some inexplicably greasy cookies. If it was our Picadilly tray of the same era, it would have a cloverleaf roll, mashed potatoes, and a tall, dark cup of amazing egg custard. Our experience with tray food for vegetarians in the past has been pretty starchy, but the memories sure are sweet. We had to re-do it and make it better for 2012. 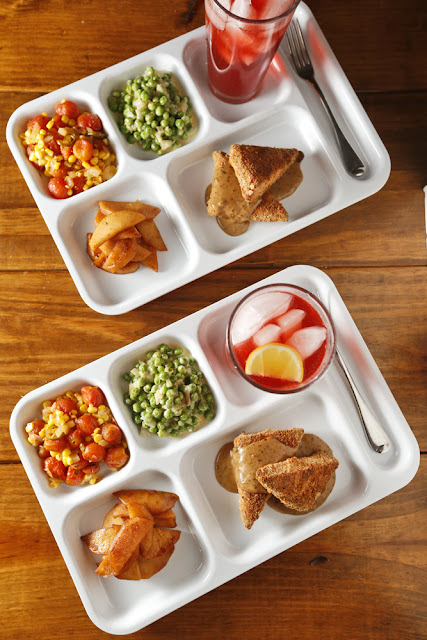 We found our trays at Lit Junior here in Memphis. (You can also procure a beige tray there if you prefer a more realistic tray food experience.) You can make this meal without them, sure, but some reason, this stuff is just better all around on a tray. (Now we have a craving to go here for the same old school vibe.)

Preheat the oven to 400 degrees. Slice the tempeh into 4 triangles. In a large bowl combine the flour, garlic, and salt. Toss it around and coat tempeh. In a separate bowl whisk the egg and mustard together and dip each tempeh triangle into the egg mixture one at a time. Put the breadcrumbs in a separate bowl and dredge the tempeh in them until they're coated. On a parchment-lined baking sheet, lay the tempeh into a single layer and place in the oven for 20 minutes or until golden brown. Serve immediately with Miracle Mushroom Gravy on top and add salt and pepper to taste. (Serves 2 as a main dish.)

Melt butter in a medium skillet on medium heat. Add shallot and when it is translucent, add peas. Add cream and truffle salt. Cook 5-7 minutes until peas are tender. Drizzle with truffle oil and add pepper to taste. 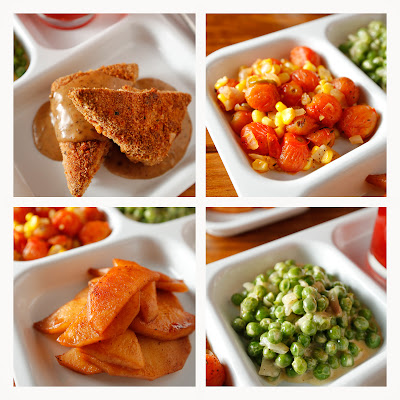 Melt butter in a medium skillet on medium-high heat. Add onion thyme and sauté until onion is translucent. Add wine. Reduce by half and then add the corn and tomatoes. Cook for 5 minutes and add salt and pepper before serving.

Melt butter in a skillet on medium-high. Add apples, sugar, cinnamon, and sea salt. Push apples around every minute for about 3 minutes. Once you see browning that signals caramelization, carefully pour in port. Let apples cook for 3 more minutes while continuing to move them around the pan. Serve them alongside the 'chops'.

Posted by The Chubby Vegetarian at 7:55 AM

Adorbs!! I need to head to Lit and get me some trays! I would soooo have to make a rectangle pizza for the big hole. Remember those? Anyway, the chops sound amazing! And so does the corn salad!

oh my goodness those peas look amazing! and what a fun tray!

Square pizza is a beautiful invention. Pizza is never bad in any incarnation!!

Love the picture! Wish my high school had served something like that.

My girlfriend & I bought a set of trays from Target because we both have some serious lunchroom nostalgia. What a perfect menu to fill those babies with!

And as a side note, may I just say that I'm following your exploits on the facebook, and you guys are seriously ROCKING the house. A huge congratulations on everything going on in your crazy exciting lives, and, as always, your food remains gorgeous, delicious and completely wonderful.

Thanks SO much Sara!!

Finally! So glad to have found a fellow vegetarian who isn't stuck on boring dishes. I had a hard time making the switch but I did finally make it a few years ago - and now my kids are wanting more vegetarian meals. You definitely have some fun stuff (want them to make the Kool-ickles this weekend - that'll be so fun for them.