This is one of my favorite lunches. It's filling, delicious, fast, cheap, and healthy. What more could you ask for?
The recipe is that there really is no recipe. Take any good vegetable broth and spike it with some soy sauce, grated fresh ginger, minced garlic, a pinch of cinnamon, and a splash of mirin. Bring that up to a boil and drop in the greens of your choice. You could use spinach or kale or mini bok choy as I have here. Remove the greens after a few seconds and set aside.
Cook soba noodles directly in the broth rather than plain water for more flavor. They only take a few minutes to cook so keep your eye on them. Remove noodles from the broth and place them into a soup bowl. Arrange greens and other toppings on to the noodles. Chopped tofu makes a good topping, but I also like a fried egg on this as well. Garnish with sliced green onion or sprouts then add the broth. Serve with sriacha for an extra kick. You will need both a spoon and chopsticks to eat this dish. 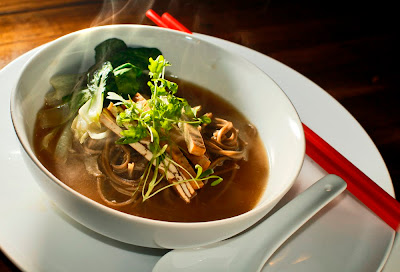 A word on soba noodles: soba are Japanese noodles made from buckwheat flour. They're more toothsome and hearty than rice noodles, and they have a dry texture that is quite appealing. I buy the packaged ones from the Asian market. They are about 3 bucks for a two-month supply, and I think they are delicious. When we had some friends over the other night, I tried to get all fancy and make my own soba noodles. It was a kitchen disaster. The noodles were a gross, soggy, falling-apart mess. It was the first time I had ever made them from scratch...I'm sure I"ll figure it out eventually. Until I get my nerve up to try hand-made soba again, the inexpensive, store-bought kind will do just fine.
Posted by The Chubby Vegetarian at 12:12 PM

I commend you on even trying to make soba. Every recipe I've seen stresses how difficult it is, so it is something I've never attempted.

Yum! I love soba noodles, and I buy mine at the Asian market too. When I did my cleanse, I could only have the 100% buckwheat noodles (most are a mix of buckwheat and wheat flour). I had to pay $7 for a small package of those at Whole Foods. Never again. That was crazy.

Where do you get mirin in Memphis? I moved here recently and can't find it anywhere!
Thanks! I really enjoy the blog!

We found mirin at the Viet Ho market on Cleveland in Midtown, and at Great China Market on Summer near White Station out east. Both are really great places to browse.

For other stuff, we also like the market right next to the amazing Chao Praya Thai restaurant on Winchester and the huge international Farmers Market at Kirby and Winchester.