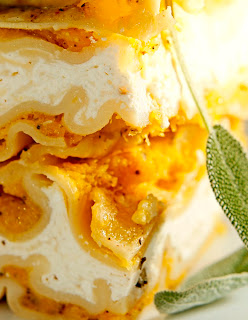 I've been wanting to make a white lasagna for a while now, and I've seen delicata squash crop up as a new ingredient, so, this weekend, on a long, interminably boring afternoon when TCV was away on a shoot, I thought, here we go! Here is Martha's recipe, which I used as a starting point.
This was one of those first stabs at a dish that worked surprisingly well, possibly due to my liberal use of olive oil every step of the way. Be forewarned that this takes a good long while to make; I didn't eat lunch until 3:00 in the afternoon since I had to give all the squash a thorough oven-roasting first. Dealing with my hunger headache was worth it, though, in the end because this lasagna actually tastes a lot lighter and more interesting than the typical and meaty red-sauce version.
The squash layer:
1 acorn squash
2 delicata squashes
olive oil
salt and pepper
3 tsp. dried sage
Preheat oven to 400 degrees. Next, carefully cut each squash down the middle. (Ideally you would do this by slicing off a bit of the rounded side of each squash in order to have it lie flat and then, using the safe-bagel-cutting method of placing a hand on top to steady the lying-flat, horizontal squash and cutting horizontally. 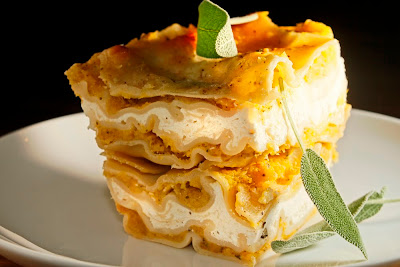 Then you can de-seed the halves, brush them with olive oil, and sprinkle with salt and pepper. Roast them face-down in a baking dish at 400 degrees for one hour. Once they cool off, scoop out the insides and whisk them all together with a tablespoon of olive oil, dried sage, and more salt and pepper to taste. Set aside.
The ricotta layer:
1 15-ounce tub of part-skim ricotta
1/4 cup grated mozzarella
1/4 cup grated Parmigiano-Reggiano
1 tablespoon olive oil
salt and pepper
Grate the two cheeses and mix all the above ingredients; set aside.
Layering all the layers:
olive oil
flat no-bake lasagna noodles (I like the Whole Foods store brand in the small green box)
fresh sage leaves
Brush your baking dish, preferably ceramic, with olive oil, and set down 3 noodles. Spread the squash mixture, then 3 more noodles. Spread the ricotta mixture in one layer, and then, of course, more noodles. End with the squash layer and more noodles and grate some mozzarella and parm on top. Arrange 12 or so fresh sage leaves on top. Drizzle top -- especially hitting the sage leaves for a fried effect -- with a little olive oil and cover with foil. Bake for an hour until top is browned. Let it cool and serve, or refrigerate after cooling. We thought it worked well reheated for dinner, so you could very well make it ahead.
Posted by The Chubby Vegetarian at 1:40 PM

have started incorporated a lot more vegetarian meals into our diet- so looking forward to seeing some of your recipes!

This picture is AMAZING. So is your blog. Thanks for the awesome recipe!

Found our new favorite. You have an excellent food blog. We kept telling our friends about your blog. Keep up the good work!!! We're displaced Tennesseans living in Wisconsin and it is exciting to see good food being made back home.