I think I dreamed about this one early Sunday morning because I popped right out of bed and got to work. It looks like a lot to do, but the steps are really simple. Plus, you'll have more biscuits than you'll need for this dish. You know what that means...snack while you cook! 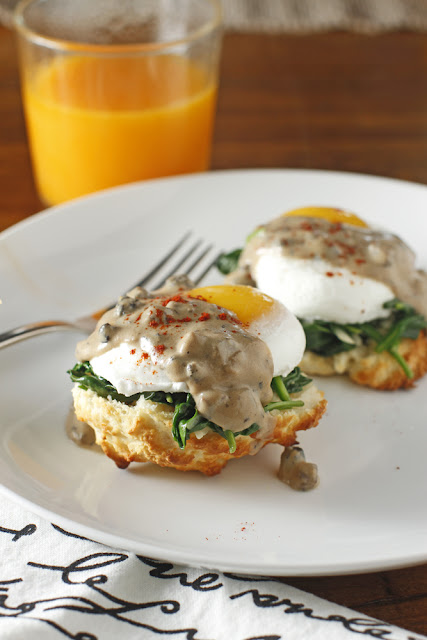 The espresso in the gravy adds instant oomph. That paired with the mushrooms makes for a super-savory gravy that you'll make again and again. Underneath you have a poached egg with a runny yolk, plenty of wilted greens, and a craggy biscuit supporting the whole dish. It's got a lot of appeal.
This is the perfect thing to make if your friends are coming over for brunch. I can guarantee they've never had anything like this before, and you can make everything ahead of time so all you have to do is heat and assemble when it comes time to eat.
Southern Benedict +  Wilted Spinach + Espresso Red Eye Gravy
8 medium eggs
1 tablespoon salt
1/4 cup vinegar
3-2-1 Buttermilk Drop Biscuits (recipe follows)
Wilted Spinach (recipe follows)
Espresso Red-Eye Gravy (recipe follows)
smoked paprika (for garnish)
In a large pan over medium heat, bring an inch and a half of water to a simmer. Add the salt and vinegar to the water and return it to a simmer. Poach eggs three to four at a time by slowly cracking the egg into the simmering water and allowing it to cook for four to five minutes or until the white is set. Remove egg from the water and set aside on a paper towel until ready to serve.
Split a buttermilk biscuit in half and place onto a plate open-faced. Place 1/4 cup of wilted spinach on each half. Top each half with a poached egg and about a 1/4 cup of the Red-Eye Gravy. Garnish with smoked paprika. Repeat.


3-2-1 Buttermilk Drop Biscuits
(Makes 10-12 biscuits.)
3 tablespoons baking powder
2 cups all-purpose flour
1/2 teaspoon salt
1/4 cup organic shortening
1 - 1 1/4 cup buttermilk
Preheat your oven to 425 degrees. Mix dry ingredients in a large bowl. Using your fingers, cut in the shortening until pieces are no larger than a pea. Make a well in the center of the flour mixture. Add the milk. Using a rubber spatula, fold the milk into the dry ingredients -- but use as few strokes as possible. The less you stir the dough, the more tender your biscuits will be.
Using a medium ice cream scoop, scoop up a 1/4-cup portion of dough and drop it onto a parchment or silpat-lined baking sheet. Repeat until all dough has been used. (You should get about a dozen biscuits from this recipe.) Be sure to leave an inch or so between each biscuit, but don't be too particular about their shape -- drop biscuits are supposed to be rustic. Bake for 15 minutes or until the craggy edges are brown and crispy.


Melt butter in a medium pan over medium heat. Add the diced shallot and cook until translucent; this should take three to four minutes. Add the fresh spinach one handful at a time; stir the greens in between each addition so that the heat from the pan wilts them down. Once the greens are wilted, turn off the heat and set aside.


In a medium pan over medium-high heat, melt one tablespoon of butter. Add the mushrooms and the black pepper, red pepper flakes, and salt to the pan and cook until mushrooms begin to brown (about five minutes). Add the espresso to deglaze the pan. Cook until most of the liquid has evaporated. Push the mushroom mixture off to one side of the pan. In the clearing, add the remaining tablespoon of butter. Once it's melted, add the flour and whisk the two together. Allow this mixture to cook for a minute until the flour becomes fragrant. Whisk in the milk, liquid smoke, and maple syrup. Stir constantly until mixture begins to boil. Reduce heat to low and cook an additional five minutes until mixture is thick.

Posted by The Chubby Vegetarian at 12:16 PM

Man, that gravy looks good! I've never seen a red-eye gravy made with flour. Neat! I should try your recipe (with soymilk of course!).

Everything on your blog looks so delicious! There are so many recipes I was to try... I wish I had more time!