The Blondises are good folk. They run Central BBQ here in Memphis, and it's a definite favorite of many Memphians. I'm sure they serve their fair share of tourists, but that actual Memphis residents love this place is in itself is a high honor. I always look forward to going there to eat BBQ. (Don't be confused -- I'm not talking about pork or chicken! Central offers a stellar BBQ portobello sandwich. We vegetarians really appreciate it.) 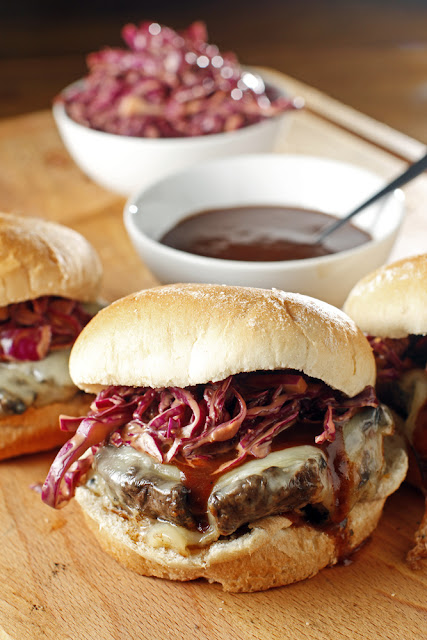 My good buddy J.C., manager at Central, was kind enough to share their secret recipe with me, so now you can make this amazing sandwich at home. It's the perfect thing to make in the backyard this summer -- especially if you expect to have a few vegetarians drop by. However, there is nothing like sitting on the front porch at Central BBQ with a tall, cold, beverage and enjoying this sandwich as hickory smoke wafts through the air. Yum!


At Central, they make their own Italian dressing, and their house made BBQ sauce is killer. I've simplified the recipe here so you can make this in a hurry and feed the masses.


Wipe mushrooms with a damp cloth to clean them. Choose a bottle of Italian dressing that is emulsified, meaning that it doesn't separate in the bottle. Marinate the mushrooms by pouring the Italian dressing over them and placing them in a sealed container in the refrigerator for at least an hour and up to twenty-four hours.

Serve each cap on a bun topped with a teaspoon of BBQ sauce and about a 1/4 cup of BBQ Slaw.

eeeyummmm! where do you buy your dried chipotle and ancho chili powders?

Penzeys is really good for those! and more

I love your blog! How do you feel about people sharing your amazing food and photos on Pintrest?

Hey Beth, good to hear from you -- as long as it links back to our blog, we're good with it at this point!

Hey J! Ok, just finished cleaning up from devouring this & it was amazing! The only thing I did differently was that I preheated my oven to 400F & cooked it gills side down for 20-25 mins,removed it then topped it with the gouda & continued til it was melted. Sorry the grill wasn't ready yet. Eating this made me feel like I was indulging in something meaty, messy & delicious. In fact, we want to add this to our regular rotation. Plus the ease of preparation will make this a great dish, even for a weeknight. Made the slaw a day ahead & marinated the bellas for 24 hrs. Everything was ready to be baked when we walked in from church. Couldn't have asked for a better vegetarian meal. Thanks so much!!!!

hi! i just couldn't pass up the chance to let you know how AMAZING this recipe was! i am very much a novice cook, teaching myself one recipe at a time + this was not only delicious but super easy! i used bottled bbq but plan on trying the homemade next time.. which just might be next week! thanks!

This was actually the first recipe I ever made from this blog. I've now made this several times over the years and each time it's been overwhelmingly delicious. With this one, I've even had my almost strictly meat-and-potatoes friend tell me "If I could eat like this all the time, I'd be a vegetarian too." I've only made it once on an actual grill. Every other time was using the oven method that Angie mentioned in an earlier comment: "The only thing I did differently was that I preheated my oven to 400F & cooked it gills side down for 20-25 mins,removed it then topped it with the gouda & continued til it was melted."

My only recommendation to fellow readers is to make only 1/4th or 1/5th of the recipe's BBQ slaw. I've always much much more slaw than was needed each time I've made this. I made 6-7 sandwiches once and still had enough left over for at least 6-7 more. The BBQ slaw does taste great by itself, but it's still best when it's complimenting something. I'm just not sure what to have it compliment other than this sandwich.

Seriously though: make this! It tastes amazing.