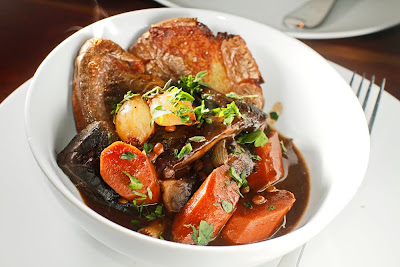 We made an all-out French food extravaganza for a friend's birthday last week per his request. The feast started with a zucchini and goat cheese tart and continued with a cool little version of a nicoise salad with blanched green beans, hard-boiled eggs, heirloom tomatoes, arugula, and a mustard-y vinagrette. The main attraction was my version of the French classic, beouf bourguignon, made vegetarian with mushrooms and a very "beefy" broth consisting of red wine and porcini mushrooms. I served the dish over some crispy-on-the-outside, creamy-on-the-inside smashed fingerling potatoes.
The French/vegetarian alliance was a hit. Everyone was stuffed so we had to make a to-go box for the mini-croissants with sliced strawberries and chocolate peanut butter we had planned for dessert.
The bourguignon has a lot of steps but is actually simple to make. Set some time aside on a weekend day to make this vegetarian version of a comfort food classic. It's shockingly full of flavor, and even the leftovers are great. 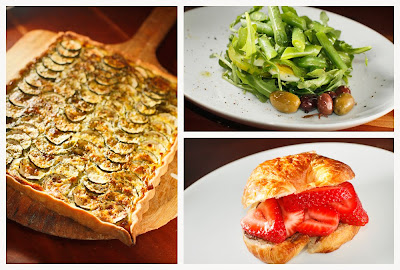 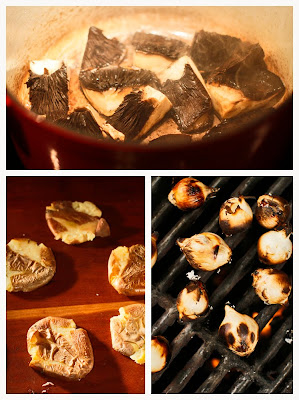 Season mushrooms with salt and pepper. In a dutch oven over medium-high heat, sear the mushroom chunks in a few tablespoons of butter or oil until nicely browned. This is best done in batches. Remove mushrooms and set aside.
Add the carrots and onions to the pot. Once they begin to brown, add the lentils, onions, and enough porcini mushroom broth to cover. Stir. Put a lid on it and reduce mixture to a simmer for about an hour and a half. Remove vegetables from the broth and set aside with the mushrooms.
Crank the heat up to high as to reduce the broth by 1/3. Remove the reduced broth from the pot and set aside. Check broth for seasoning and adjust. Add the flour and butter to the pot. Allow mixture to cook until nutty and fragrant. Add the broth back to the pot with the roux. Mix with a whisk to work out any lumps. Bring to a boil and then reduce heat. The sauce should look velvety and slightly thick. Add the mushrooms and vegetables back to the pot and coat them with the velvety sauce. Bring everything up to temperature just before serving. Serve over smashed fingerling potatoes and garnish with parsley.
*Fire-Roasted Pearl Onions
15-20 pearl onions
Toss onions onto a hot gas grill until the outer skin is nice and charred on all sides. This should only take a few minutes per side. Remove and place into a covered container to cool. Once cool, the onions will slip right out of their charred skin. This is a great way to add smoke and flavor to any dish.
**Porcini Mushroom Broth
1 ounce dried porcini mushrooms
3 cups water
1 white onion
3 tablespoons olive oil
6 ribs celery
2 medium carrots
1 cup parsley
6 sprigs thyme
1/2 lemon
2 bay leaves
teaspoon sugar
teaspoon salt
1 tablespoon tomato paste
2 cups dry red wine (We used Independent Producers Merlot)
3 cups water
Reconstitute mushrooms in 3 cups of warm water for about an hour. Remove mushrooms and reserve for another use. Strain liquid through a coffee filter or paper towel to remove any grit or dirt that may have been lingering on the mushroom. This liquid is what will give your broth that "beefy" flavor.
Now process the onion in a food processor until it is broken down. In a stock pot over medium-high heat, sweat the onions in the olive oil until onion is translucent. Process the celery and carrots in the same way; now add them to the pot. Add the mushroom soaking liquid and the remaining ingredients to the pot and bring to a simmer. Reduce heat, cover, and allow mixture to cook for 20-25 minutes. Strain out all of the vegetables and save them for the compost pile. Return stock to the stovetop with the heat on high and reduce stock by about 1/3.
Posted by The Chubby Vegetarian at 7:07 AM

This sounds absolutely incredible! If my husband liked mushrooms I would make it tonight! (I just have to plot a sans hubby occasion to make it now....)

Wow looks amazing. I am currently printing this out and going to try it this long weekend! Thanks!

Chocolate peanut butter!! That was my favorite part...but everything else also looks delicious as always, Justin. You're so fancy!!