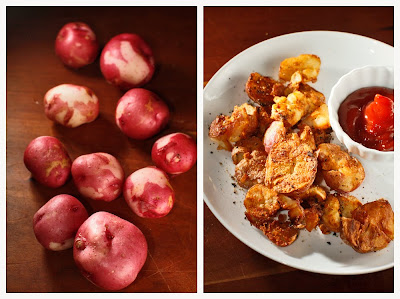 Our 4x8 raised bed garden had been fairly inactive with some cabbage and greens barely hanging on through the winter. Finally, on a nice day this spring, we decided to turn the garden and add some compost so we could plant tomatoes, beans, peppers, and eggplant. At the same time, our five-year-old neighbor was helping us plant a bunch of variegated monkey grass in a bare spot in the backyard when TCV brought over a surprise: about a pound of very dirty baby new potatoes.
TCV looked puzzled; thrilled, I explained my forgotten potato experiment.
As a lark last fall in the raised bed outside, I went ahead and planted some Yukon Gold potatoes that had started to vine out of the bowl where we store them. A few green leaves emerged from the soil after a while. I thought it was the beets and paid them no mind at all. Turns out we were growing potatoes and didn't even know it.
My little neighbor called the dirt-covered veg so gross, and we suddenly had to find a way to explain to her that most food she likes grows in dirt: french fries, potato chips, broccoli...you know -- everything! I don't think our argument was convincing enough because she still thought we were kidding her, gave us a very skeptical look, and went right back to neatly planting more clumps of monkey grass.
We did have smashed new potatoes for an after-gardening treat, and they were the best. Grow them or grab some at the store, and either way, there is no possibility you'll be disappointed.
Smashed New Potatoes
new potatoes
canola oil
sea salt
cracked black pepper
ketchup (optional to some; required for us)
(Basically, you do this: Bake. Smash! Fry. If needed, we've helpfully included more detailed directions included below.)
Bake (clean) new potatoes in a 350 degree oven for 20 minutes. Remove them and allow them to cool. Smash the potatoes -- hard! get out all that stress! -- with the bottom of a frying pan. Pan fry the smashed potatoes in about 1/8 inch of canola oil heated to medium-high heat; you just need to crisp the outside since the potato is already cooked through. Remove them and drain them on paper towels. Sprinkle with salt and pepper. They taste better than regular old french fries because you get the baked potato flavor and the crispy crunch.
Posted by The Chubby Vegetarian at 8:20 PM

That is SO cool!

Just finished a plate of these with a salad as a lazy brunch. Perfect!