This article in the New York Times got me to thinking about a story I wrote for Edible Memphis some time ago. So, I thought I'd share. 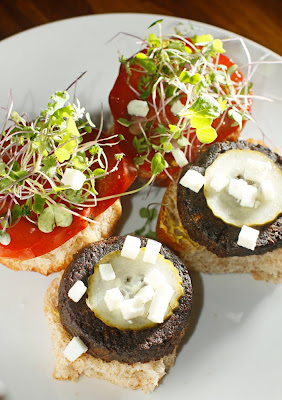 My aunt eyeballed the burger that was set in front of her. Inspecting and scrutinizing it, she poked at the patty with her finger, and then she peeled back the bun to get an even closer look.

“It’s a veggie!” she proclaimed. She took a resigned bite of the sandwich. Even before this catastrophe, she had been dismayed by the fact that there were veggie burgers present at our family get-together, and her concern that she may have been given one by mistake grew. “I can see the vegetables,” she cried before her second bite. I sat down beside her and attempted to point out the visual differences between her beef patty and my veggie patty, but she wouldn’t hear of it. It was a veggie, and that was that.

Right then, I realized that veggie burgers had a real image problem.

They do come by their bad reputation honestly. For the most part, people are familiar with the myriad of dry, tasteless, hockey pucks found in the grocery store freezer case, but that’s not all there is. With nearly any food, fresher is better, and lucky for us, Memphis is home to many fresh, inventive examples of not only how veggie burgers are done, but also how they are done right.

My first stop was to see Balewa Bayete, a vegan for thirty-two years; he assembles a burger behind his own counter inside of Sean’s Deli on Union Avenue. Balewa’s Vegan Gourmet offers two stellar choices: Original Live Burger and Shiitake Burger. Both burgers are filling, spicy and delicious. He admits that the veggie burger is a great first step for those who are looking for a better way to eat.

“It is not a medicine burger,” he remarks, “but it is food that nourishes the body.”

His own recipes takes fresh to a whole new level. His burgers, made with organic beets, mushrooms, flax seeds, oat bran and spices, are not cooked, but dehydrated to preserve the nutritional value of the fresh ingredients. While he has been making different versions of this sandwich for fifteen years, he stopped using soy as an ingredient some time ago. Most of the frozen-box burgers use soy to replicate the texture and flavor of meat burgers. “It doesn’t need to taste like meat,” he says.

He’s right. The best veggie burgers in Memphis make little attempt to replicate the true flavor of meat, but offer something new for the palate. There is a certain freedom in disassociating the veggie burger from its meaty brethren.

Patrick Reilly recently created a house-made veggie burger to add to the already veggie-friendly menu at The Majestic Grille. The inspiration came to him while visiting friend and fellow chef, Tom Hughes, in Florida over Superbowl weekend. Tom features a veggie burger on the menu at his restaurant, Graffiti Junktion. His creation uses polenta as a base. Patrick liked the concept but decided to make it regional by using Delta Grind grits, as well as a little oatmeal, as the starting point for his burger. He flavors it with chopped mushrooms, onions, garlic, spinach, and then he adds pinto beans to the mixture for a bit of protein. The grits and oatmeal provide a nice chewy texture while the beans add a bit of richness. The grits hold the burger together so well that there is no need for an egg binder, so Patrick’s veggie patty is vegan as well. The presentation is the same as a traditional meat burger: toasted bun, lettuce, tomato, mustard and a nice helping of Majestic’s wonderful Parmesan shoestring fries.

In addition to the sandwiches I have already mentioned, there are many more veggie burgers to try. Houston’s makes their veggie burger in-house by using roasted beets, brown rice and jalapenos. It’s grilled over a hardwood flame and glazed with sweet soy sauce. The beets give it a peculiar purple color and it is always a stellar choice. Janice Blanchett also makes an oat burger that is out of this world. It’s the same oat burger I got as a kid from Squash Blossom and as a young man from Square Foods. Now she makes them for Otherlands. Last but not least, Huey’s puts on a pretty good show in the veggie burger category. Though the patty itself is bought from a distributor, they manage to make it their own with a combo of seasonings and atmosphere. In a town famous for barbecue, it is amazing how many healthy, flavorful alternatives are available.

With all of this in mind, I decided to take what my chef friends taught me and try to make my very own fresh veggie burger patties at home. Just to be super-trendy, I thought I’d make sliders instead of regular-sized burgers. Of course, my aim is to make a veggie burger even my doubtful Aunt could love.

-Reprinted from the Spring '09 Edible Memphis. Pick up a new copy of the magazine to read a story about our dining room table and to see a photo essay about kitchen radios.

Thank you! People are always shocked when I (vegetarian for 21 years) HATE most veggie burgers. I have no use for the ones that try to emulate meat. Give me a quinoa veggie burger, give me a marsala veggie burger, but don't give me that hockey puck veggie burger that restaurants put on their menu as an attempt to assuage the vegetarian crowd.

The dining room table story was wonderful! I really enjoyed it.