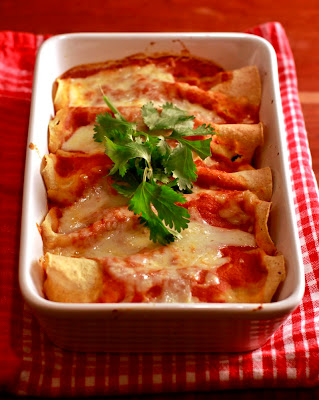 I opened my last can of store-bought enchilada sauce more than three years ago. As much as I loved enchas (as we call them), I could not stand the metallic, acrid taste of most prepared sauces. I set out to figure out how to make it on my own. For some odd reason, I never looked at a recipe, so traditionalists beware. I just grabbed a pot and started throwing in dried peppers and garlic until I came up with something that I liked. The truth is, like most things, I never make it the same way twice. You can use the provided framework to experiment with fresh, dried, and smoked peppers. Each pepper carries with it its own unique flavor profile and heat level.

Make plenty of this spicy sauce and freeze what you have leftover in a tupperware container. Then next time you want to make huevos rancheros, enchiladas, or burritos, you are already halfway to homemade. 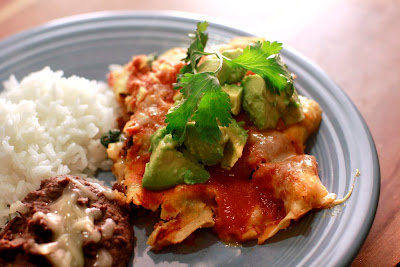 Drizzle a few tablespoons of olive oil into a large pot, and set to medium heat. Add the dried anaheim peppers and toast in the oil until brown and fragrant. Add the onion, and cook until translucent. Add the rest of the veggies, and add enough water to the pot to just cover. Bring to a boil, and then reduce heat to simmer. Allow to simmer for about 45 minutes to an hour. Use an immersion blender to blend the sauce smooth. Add salt to taste, then add a touch of sugar if you think it needs a bit of sweetness. Return to the heat and allow it to simmer uncover to concentrate the flavors. The longer it cooks, the hotter and sweeter it gets.

I filled corn tortillas with sauteed onion, field roast, mexican cheese, and spinach, then covered them with the sauce, and baked them in a 350 degree oven for 25 minutes. Serve with rice and beans.

Posted by The Chubby Vegetarian at 11:57 AM

Wow, this sounds fabulous! Can't wait to try it!

looks good to me. Now, did you use the canned chipotles? For some reason, they don't bother me nearly as much as the canned enchilada sauce...

THANK YOU for this amazing recipe! I made this last night for a friend's birthday dinner and everyone commented on how fabulous it was. I'm new to your website but will now be a frequent visitor! Thanks again for sharing :)