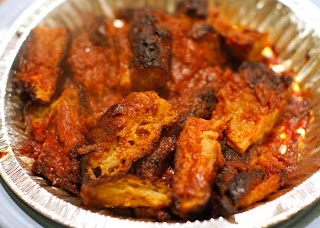 I decided to make my own seitan, and as daunting as it seemed, it was not difficult at all. For those who do not know, seitan is a meat substitute originally developed for Buddhist monks. It's made from vital wheat gluten flour, which comes from the endosperm of the wheat berry, the most protein-laden part of wheat. The process takes a while, but the hands-on time is minimal. Also, you get the satisfaction of making your own meat. It is like hunting -- sort of. I read several recipes before coming up with my own to try. You will need:
2 cups of vital wheat gluten flour
1 1/4 cups of strong stock
more stock for boiling (throw some onion & celery in for more flavor)
1 tablespoon of bbq seasoning
1 tablespoon of sesame oil
salt to taste
In a stand mixer with the dough hook attachment, mix dry ingredients, and then add the 1 1/4 cups of stock & oil. Mix for approximately 2 minutes.  Allow mixture to rest for 1o minutes. Cut dough ball into 3 portions. Stretch each portion until each is about 1/4 inch thick. Drop seitan cutlets into boiling stock, cover, and cook for one hour.
They will double in size when they're done. They have a very meaty texture that goes well with just about anything. You can use them in the place of chicken or pork in just about any recipe. 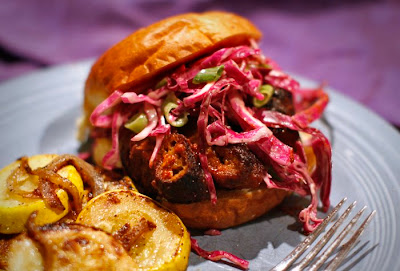 I used mine to make BBQ because I love it. I gave them a good dry spice rub, brushed them with oil, and placed the cutlets on the grill using low, indirect heat and allowed them to cook for about 30 minutes. Then I basted them with my favorite BBQ sauce every 10 minutes for the next 30 minutes. If your sauce has a lot of sugar in it, turn down the heat even lower. Pull the cutlets off the grill, and allow them to rest for a few minutes before chopping them.
For the purple cabbage and green onion slaw:
4 cups purple cabbage (shredded)
1/2 cup green onions (chopped)
1/2 cup mayo (I like Spectrum eggless vegan light canola mayo)
salt & pepper
Buy some wheat buns or make THESE  from Vegan Dad's blog. Assemble your sandwich by placing chopped BBQ whet gluten on top of the bottom bun, and then a little extra BBQ sauce, and then about 1/2 cup of slaw. You are now ready to rock. This is a colorful, healthy alternative to pork or beef BBQ.
Posted by The Chubby Vegetarian at 3:15 PM

This looks delicious. I make seitan for us. It is so much cheaper to make than buy. Here in Texas it costs over $3.75 for just an 8oz package. Hope you and the Mrs have a lovely weekend.

this looks like a much easier way of making seitan. i gonna try it. thanks kensan