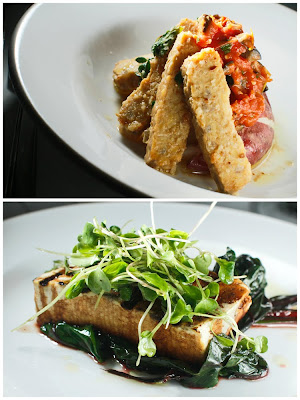 Wow...sit-down dinners with multiple courses expertly paired with delicious wines. I mean, who wouldn't love it? However, my diet (and my wallet) keep me from attending too many of these events. Most of them tend to be pretty meaty anyhow. With so much going on in the kitchen, I hate to be a bother and ask the chef for something special.
However, last night we were invited to Bari for a wine dinner to benefit Slow Food Memphis. Knowing that several vegetarians would be attending, Chef Jason Severs planned a vegetarian option for the two seafood dishes on the five-course menu.
While most enjoyed rock shrimp over new potatoes with an olive-laced tomato sauce, I was treated to warm tempeh with the same set-up. What a treat! It's nice to see a chef unafraid of such an unusual ingredient. When the time came for the fish course, I received a well-seasoned tofu steak that had been seared on the grill and served over wilted swiss chard and topped with microgreens from Urban Farms and a sweet white balsamic vinegar reduction. Earthy, smoky, sweet, and spicy...this dish was really awesome.
I'm grateful when a chef like Jason takes the time to think about the meatless among us. It was a great night and an incredible meal. (And we're so planning an orange-honey-and-almond dessert inspired by Jason's creation because that was really something to remember as well.)
Posted by The Chubby Vegetarian at 8:48 AM

Looks great. It's very nice, when chiefs think about vegeterians among us