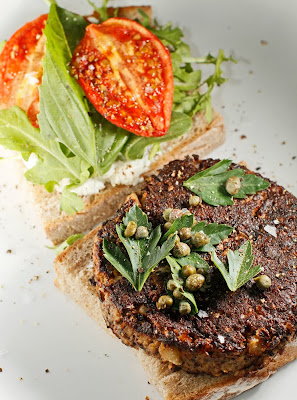 This became a veggie burger, but originally, it was not my intention; I actually made this mixture as a filling for a ravioli dinner the night before. Once I had filled all of my pasta, I had a bit left over, so I decided to make an Italian-themed burger out of it the next day for lunch.
And I have to tell you, it was even better than the ravioli.
I served the patty on rustic Italian wheat bread that I smeared with ricotta. I also garnished it with oven-dried tomatoes, basil, arugula, capers, and parsley. The patty was meaty and moist without completely falling apart, which is the usual veggie-burger hazard. All of the flavors played nicely together, and as an added bonus, it was also one of the most simple veggie burger patties I've ever made. Lo and behold...The Accidental Veggie Burger!
20 onces mushrooms (crimini, button, portobello)
1 1/2 cups onion (finely diced)
salt & pepper
3-4 tablespoons olive oil
splash champagne vinegar
7-10 kalamata olives
1/4 cup ricotta
1 large egg (or two small)
1/4 - 1/2 cup panko breadcrumbs
Preheat your oven to 350 degrees. Roughly chop the mushrooms and place them onto a roasting pan along with the onion. Toss onion and mushrooms with the olive oil, a pinch of salt, and plenty of black pepper. Roast mixture for 20-30 minutes or until most of the moisture has evaporated. Set mixture aside to cool.
Place all ingredients in a food processor and pulse until well incorporated. The mixture should be the consistency of a bread dough. (If it's too loose, add a bit more panko.) Place mixture in the fridge for 20 minutes. Form patties and pan fry them in a little olive oil over medium heat until they're brown on both sides and also cooked through.
Posted by The Chubby Vegetarian at 11:33 PM

a must try!! have yet to make veggie burgers but crave them all the time here in italy! thanks

Looks good, but would it be okay to omit the egg, as I don't eat them? what's your suggestion? I have a couple of veggie burger recipes on my blog; you might like to have a look. I find that the basic principle of a cooked mashed pulse,a ground seed/ nut/ both, a grated vegetable, seasoning and some porridge oats to hold it all together is good. You end up with combos like mung bean and sweet potato, chilli bean and bell peppers etc. and you can vary the flavours almost infinitely (especially by making a relish to suit each kind)!

YV-
Not sure I'd just leave the egg out of this one because it may not hold together. I'll bet some sort of egg replacer or tapioca starch would work nicely. The best thing given the Italian theme may be to add a bit of garbanzo bean flour then you'd have a savory panelle/ veggie burger mash up.

Let me know if you try it and I'll post the result.

Methinks you nailed it...thanks I will try it.

It sounds weird, but I use an egg-sized amount of mashed banana sometimes for burger binder. You can't really taste it and it holds the patty together well.

Thanks, I'll have a go one of these days and let you know. The chickpea flour sounds like a really good idea; it works as an egg replacer in other dishes.

Instead of champagne vinegar I used red wine and it tasted good.

good point Kristi, You just need an acid weather it's lemon juice or vinegar. It all works the same.