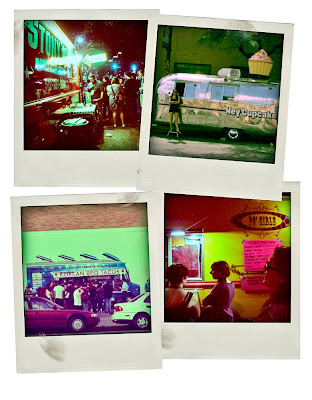 The laws, they are a changin'. Recently, there was a Memphis City Council proposal to relax the restrictions on food trucks and food carts. This action could allow chefs a legal way to hop on the food-truck bandwagon and could result in a plethora of new and exciting outdoor dining options for a hungry public here in the Mid-South.
To mark this momentous occasion, Beyond BBQ, a group dedicated to celebrating Memphis's rich food culture, is putting on a food truck festival on Tuesday, April 19th, from 11 a.m. to 2 p.m. at Court Square in Downtown Memphis. Come on out and show your support! We have several restaurants lined up to serve you a hot lunch from a super-cool truck. If you are a vendor who would like to participate, leave me a comment, and I'll put you in touch with the right people.
So why am I so excited? I have seen what a rich, mobile food-truck culture can bring to a city. I experienced it firsthand while in Austin, TX for the annual SXSW festival. Cupcakes, tacos, falafel, BBQ, pizza, veggie dogs, coffee, and even fine dining options all from the trucks are available everywhere you turn in Austin. They even have 'trailer parks' where food trucks can park and sling their goods to throngs of hungry, hungry hipsters. These parks have picnic tables, covered seating, and a generous b.y.o.b policy that adds to the whole fun of the experience.
So, why trucks? Opening a food truck operation costs very little (20-50K minimum, according to Deni Reilly) when you compare it to opening a conventional, non-mobile restaurant. This allows visionary and niché chefs who may not have the capital to open a conventional restaurant space the opportunity to take their cuisine public. It will also allow established chefs a fun way to do something new and exciting. And it gives the consumer more options, which is never a bad thing.
On my final day in Austin, I decided that I was only going to eat it if it came from a truck, and I'm so glad I did. For breakfast, I ate at Torchy's Damn Good Tacos (read my post HERE). There, I tried my first deep-fried avocado taco...simply amazing. The warm, buttery avocado was enveloped in a light and crispy batter -- kind of like tempura. The whole thing was wrapped in a flour tortilla and dressed with lettuce, pico, and hot sauce. I could have eaten two more of those, but there was more food out there. And I was on a mission.
My friend Olivia, a transplanted Memphian, made several great-sounding suggestions for where to eat in her adopted hometown of Austin. She was particularly enthusiastic about a place called East Side King. She said the chef was the sous at one of the finest restaurants in Austin and quit to open a food cart. She told me that it is located in the back of Liberty Bar right outside the main part of downtown. Intrigued, I decided to seek it out. 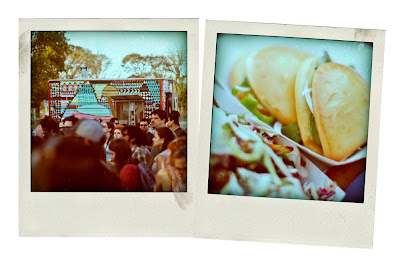 Memphis Flyer music editor Chris Herrington and I arrived at 1618 6th street and found ourselves smack dab in the center of about four SXSW-connected day parties. We were trying to take a break from the madness, but the madness followed us everywhere. Undeterred by the $7 parking and drunk-in-the-day crowd, we pressed on past the doorman, past the bar, past the bad music, right to the back of a crowded, dusty lot where a small, spray-painted trailer, the East Side King, sat.
I ordered for us from the one menu that was tethered to the counter: veggie meshi and curry buns. We were told that it'd be at least 30 minutes. Whatever. We'd come this far; what's a few extra minutes? The wait was made to seem longer by a terrible band, an uninspired Pixies-inspired trio, but when the food came, honestly, it was all worth it. It was one of the best meals I have ever had -- and certainly the best meal I've eaten out of a paper boat. The veggie meshi was a Thai brussles sprout salad over ginger rice with mint, pickled onion, and jalapeno. It was so good it made Chris tweet, "If you think brussles sprouts can't be delicious, Austin's East Side King food truck will be happy to correct you. Holy crap!" The crispy buns stuffed with peanut butter curry and vegetables garnered a similarly enthusiastic reaction from us both. This was restaurant-style fine dining out of a 10x20 box. This place is sure to see my face again. 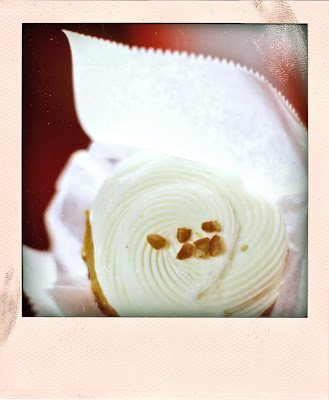 An interview, photoshoot, and a few showcases later, I was ready for more, so we stopped by the famed Hey Cupcake! Airstream trailer that was parked in front of Emo's. I opted for a carrot cake cupcake with cream cheese icing. While Chris and I agreed that Hey Cupcake! is no match for Muddy Bake Shop here in Memphis, my dessert was the perfect thing to tide me over until I spotted the Mmmpanada truck on the way back to the car.
I choose the soy chorizo with brie empanada from several great-looking veggie options; it set me back a mere $4. Roughly the size of a fried pie, the baked crust was generously filled with tasty brie and savory tofu. It made me think that this may be the perfect food-truck food: no need for utensils, self-contained, portable, filling, cheap, and delicious. I'm a sucker for empanadas anyway, and these were some of the best.
After all of this, it was then time to edit photos and get some sleep 'cause we were headed back to Memphis in the morning.
So I'm excited about what's to come here in Memphis. Although there are a few trucks ready to go (Fuel, Yolo, Central BBQ), I realize that it won't be an instant change, but I do hope that some (I'm talking to you, Ken) will take the chance and jump on the food-truck bandwagon. I can close my eyes and imagine the parking lot of Tom Lee Park full of trucks and trailers ready to serve up unique dishes to adventurous Memphians or a dessert truck serving fresh baked cookies and some paletas in Overton Park, or a taco truck waiting at the end of the Greenline to feed road-weary runners and cyclists. I want that for us. If you want this, too, come out to Court Square on the 19th of April for a lunch that is sure to launch a food movement.
Posted by The Chubby Vegetarian at 4:37 PM

This is great news. I have always wanted to start up a fish-and-chips truck and drive it around to the bars at closing time--and then drive it straight to the bank.

Thats awesome! I wish we had such things here where I live. Also, ps. super cool photos!

I was at sxsw for 11 days this year and I ate almost every single meal off of one of these trucks. The offerings were great, healthy, and locally sourced. Seeing something like that in Memphis would be a god send.

Loved the food trucks when I lived in Portland. Spent many a sunny lunch time with a bento box or pad thai in the park. So glad that Memphis is removing the archaic restrictions banning them.

Love everything about this post. I was just talking to G1 about the new law the other day. When/what are you planning for your truck? ;)

I ate the Thai Chicken Taraage from east side kings trailer and it was insane!!! i went home and recreated it to damn near the original dish, twas amazing. i WISH I had he start up cuz i would murder the food truck scene!!! hands down!!

Also ask him to remove the 10 p.m. - 6 a.m. curfew for food trucks. As written now, http://bit.ly/i3hRM1, you wouldn't be able serve people coming out of bars at closing because most bars don't close before 9:30 p.m.

I would also ask that we ease up on the signage restrictions. the Hey Cupcake cupcake and the Stony's arrow would be prohibited with our ordinance.

How about lentil tacos with homemade pico, lots of cilantro and herbal tea that isn't overpriced? Think that would sell? I'm thinking about getting a food truck myself.

I'd buy it. Click on over to my facebook page to see what memphis food-truck shoppers are looking for.

I want a food truck, but where to buy?

Im restoring a 55 ford delivery truck to use as a cafe looking for anyone interested in food trucks to bounce ideas off any help would be great
flamed181@yahoo.com