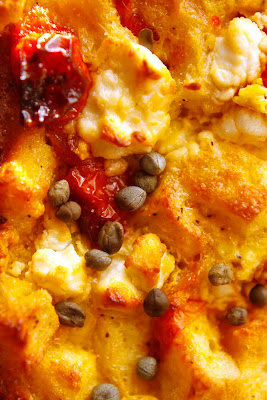 Snow Day! Yesterday The Wife was off of work because of the icy roads, so I decided to cancel all of my appointments as well. It was wonderful to have a day in the middle of the week to do nothing. So that is what we did, and it was great. Since we were up at 5:30 to watch the news, we had plenty of time to make a weekend-style breakfast. Recipes for savory bread pudding have been popping up in all of my food mags, so I decided to get in on the action.
4 thick slices of  rustic bread (cut into 1/2 inch cubes)
6 medium eggs
1 cup of 1/2 & 1/2
1 shallot (sliced)
1 pint of grape tomatoes
4 oz goat cheese (crumbled)
2 tablespoons capers (rinsed and dried)
olive oil
S & P 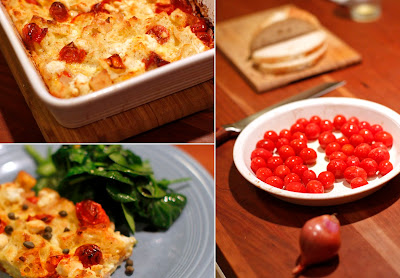 Preheat the oven to 400 degrees. Toss the tomatoes in a few tablespoons of the olive oil, and then arrange them in an oven-proof dish. Let the tomatoes cook in the oven until the skins have turned dark, which should take about 15 minutes. I know I'm a little obsessed with roasted tomatoes right now, but I'll get over it soon enough. In a bowl combine the 1/2 & 1/2 with the eggs, and whisk until incorporated. Add the bread and the shallot to the egg mixture and stir until all of the bread cubes are covered with egg. Next gently fold in the tomatoes being careful not to mush them up. Reduce the oven 350 degrees. Pour the egg mixture into a medium-sized, oiled baking dish, and then top with the crumbled goat cheese. Cover with foil, and bake for 30 minutes. Uncover the dish, and bake for another 15 minutes. Distribute the capers over the top once you take it out of the oven. I served the savory bread budding with some sauteed spinach and a fine glass of orange juice.
Posted by The Chubby Vegetarian at 10:42 AM

mmm, this sounds fab! I will keep it in mind for when we next have some home made bread needing used up (my other half bakes fantastic bread but usually in bigger batches than we can comfortably eat and our freezer is stuffed to the gills!)

Lol. In Scotland we'd call those cherry tomatoes....not like cherries are any more scottish than grapes, but it's a neat distinction!

Yum! This sounds super good! I work with Chavrie (the pyramid-shaped goat cheese) and I love to see new, unique recipes especially for breakfast/brunch! Thanks.

OMG! That sounds so good. I am making it this weekend. I can't wait to try it. I'm a huge fan of goat cheese. Cheese is the reason I'm a vegetarian and not a vegan. Yum yum.

It might sound odd, but my very favorite part of bread pudding is the crunchy top layer. And from the pictures here, you had one uberly delicious crust! And this recipe is pantry-friendly - great work :)