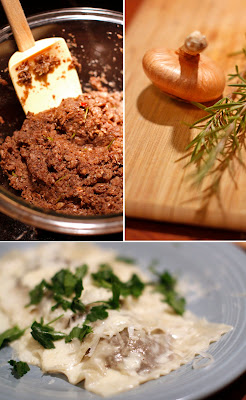 A few years ago, at the request of The Wife, I made some ravioli. I made the dough. I made the filling. I tried to make each one perfect. It was a disaster. The dough was gummy and thick, and they fell apart in the water. I fished three or four good ones out and presented them to The Wife. She knew how hard I had worked on them, so when I asked if she liked them, she said, "Yeah." I asked if she really enjoyed them, and she replied, "Uh-huh." I said, "So, you will remember this meal forever." She nodded her head. "Good," I told her, "'cause I am never making ravioli again." I had decided that it was just too frustrating.
Then the other night at Kelly and Michael's my interest in homemade ravioli was reborn. They served us ravioli stuffed with mascarpone, porcini, and roasted eggplant in a garlic cream sauce. I asked how he made the dough. He told me that he had bought it. It was a revelation. At that point, I knew that ravioli could be fun again.
Ingredients:
About 30 wonton wrappers
1 egg
3 cipollini onions (peeled)
2 large portobello mushrooms (roughly chopped)
1/8-1/4 cups bread crumbs
1/4 cups shredded parmesan
2 sprigs of rosemary (stems removed)
1/4 cup red wine
drizzle of balsamic vinegar
S & P
olive oil
Place the mushrooms and onions into the food processor and allow it to chop the vegetables very fine. Transfer the mixture to a large saute pan that has been coated with a generous amount of olive oil. Spread the mixture evenly over the bottom of the pan, and allow it to cook over medium-high heat for a few minutes. Stir it, and then spread the mixture evenly over the bottom of the pan again. Do this until the onions are lightly caramelized and the mushrooms have taken on a darker color. Add the balsamic vinegar and rosemary, and then deglaze the pan with the red wine. Using a wooden spoon, make sure to scrape up all of the bits that stuck to the bottom of the pan. Transfer to a mixing bowl, and then add the cheese, and enough bread crumbs to give it some body, but not so much that they make the mixture too dry.  Add some salt & pepper. Now taste the filling and make any adjustments as you see fit. 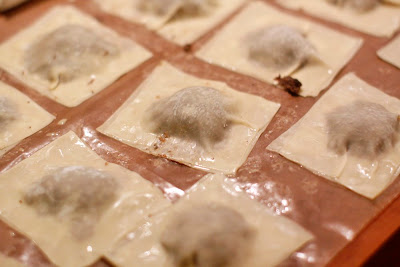 Now for the fun part. In a small bowl, mix the egg with a tablespoon of water, and then set it aside. Lay 15 wonton wrappers on a long sheet of parchment paper. In the center of each wonton wrapper, place 1 tablespoon of the mushroom mixture. (I use a measuring spoon to scoop each portion.) Now dip your two forefingers into the egg mixture and wipe all of the edges of one of the wonton wrappers. Take a new wonton wrapper out of the package, and then place it on top of the egg-washed half while smooshing the filling enough to line up the corners. Now press the edges together forming a tight seal. It may take a few times to get the hang of this, but it is easy once you have done a few. Repeat until you have made all your raviolis.
To cook, simply drop raviolis into a large pot of hot water. You want to bring the water to a boil, and then reduce the heat because a rolling boil will unravel your ravioli. They take 2-3 minutes each to cook. You will know they are done when one end floats to the top. I removed the raviolis and placed them directly into a sauce I made using 2 minced cloves of garlic, 1/4 cup of cream, and a cup of milk.
A simple presentation is best here. Place 4 raviolis on a plate, drizzle with some of the garlic cream sauce, and then sprinkle on some parmesan and fresh parsley. You will love this dish because for {relatively!} little work, it turns out so, so good.
Posted by The Chubby Vegetarian at 3:01 PM

You forgot about the truffle oil. My sauce wouldn't have been as good without it!

WOW! this looks so apetizing!

Would a small Vidalia onion work as well?