After having some baby kale dropped off at our door this week by Amy's dad, who's always got some awesome food growing at his place, Concord Farms out in Slayden, Mississippi, we started thinking about what our new version of spinach-artichoke dip would be. The Lawrence side of our family orders spin-art dip whenever it's on a restaurant's menu, and it's just something that everybody at the table agrees is great. 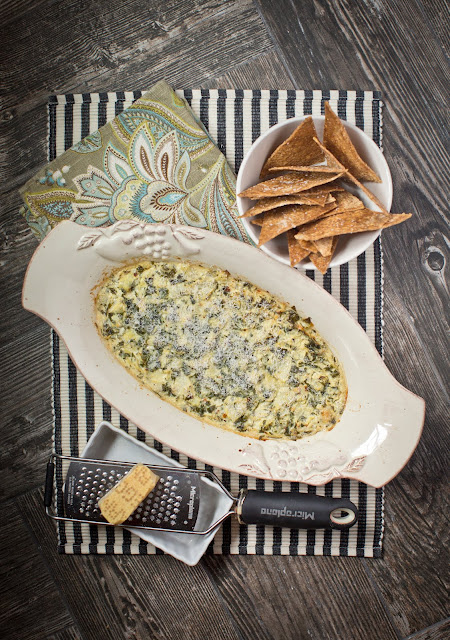 Feeling inspired by Whitney's Coconut Creamed Greens recipe that we make all the time, we decided it was time to finally make a greens-and-artichoke dip, you know, officially. In the past, we have posted an artichoke dip that we've been making since we were teenagers in Germantown, Tennessee, and we've done Spinach and Artichoke Ravioli.

(This dip with kale is part of our lunch today along with these beauties as we're hanging out in the kitchen and putting together a dessert for a going-away dinner tonight. We'll share what we decided to create for this soon!)

Boil 2 quarts water in a saucepan; add 2 tablespoons of salt. Place the kale in the saucepan to blanch, which takes a minute or two and turns the kale bright green. Remove kale from the pot using a mesh strainer or spider and set it aside to cool.

Preheat oven to 350 degrees. In a medium bowl, whisk together the coconut milk, Greek yogurt, vinegar, and egg. Add the artichokes, garlic, parmesan, salt, red pepper flakes, and black pepper. Drain and roughly chop the kale and add it to the bowl. Stir ingredients until well incorporated and pour into a small casserole dish. Bake for 25 minutes or until dip is lightly browned around the edges. Grate some parmesan on top if you like. Serve with Baked Tortilla Chips.

Preheat oven to 350 degrees. Cut tortillas into 1/8ths making them into triangles. Lay them out in one layer on a parchment-lined pan. Drizzle with the olive oil and sprinkle with the salt.