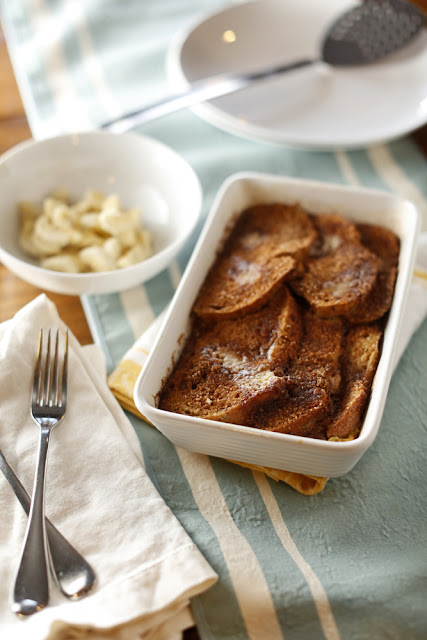 Do you remember having cinnamon toast as a kid? What a vice that was. Bread, butter, cinnamon, and sugar for breakfast! This dish combines that wonderfulness with the heartiness of French toast. You can make it ahead and not even worry a bit about standing over the stove and wondering if it's gonna get cold.

Not wanting to waste any egg, which usually is par for the course when making French toast, we skipped the griddle and put all the ingredients into one pan. Seriously, in no more than 10 minutes, it's baking in the oven, and the whole house smells cinnamon-y. 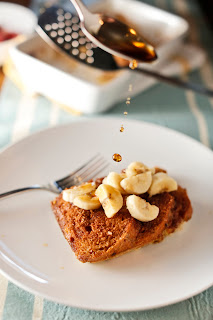 Preheat the oven to 350 degrees. This will give the bread enough time to soak up the egg mixture. Once the oven is preheated, cover the dish with foil and place into the oven for 20 minutes, uncover, and return the dish to the oven for another 10 minutes. Serve hot with bananas and warm maple syrup. (Serves 4.)

I'll have to try this with the Vegg egg replacer powder. I've been using that for my French toast and it is perfect!

My mama used to make cinnamon toast in the oven all the time and it was soooo good.

I remember the lovely days of cinnamon toast. Awesome that you can do this all in one pan.

Oh my goodness this sounds so delicious!!