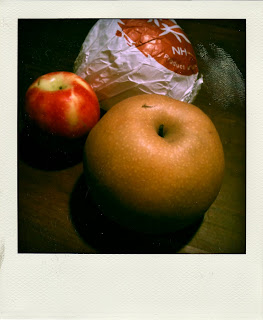 (We have been making our own kimchi for a while now. We even made some using turnips in place of the cabbage. The recipe below has been updated to reflect a few improvements including the addition of our own Vegetarian Fish Sauce and instructions on fermenting the kimchi on the countertop for a few days prior to use. This is a great recipe that we use all the time. We hope that you will try your hand at making your own kimchi in your home. 2/22/13)

I got a hot tip about how to make delicious kimchi from Sue, the owner of Kwik Check, a great sandwich shop on Madison Avenue here in Memphis. She told me that the reason their kimchi is so good is that they use a ground-up Korean pear in each batch as a sweet element to balance out the bitterness of the cabbage. Brilliant! But where in the heck was I going to find a Korean pear? Sue disappeared into the kitchen and re-emerged with a larger-than-softball sized fruit that had a golden skin. She was willing to let me have it if I wanted to try my hand at making kimchi. 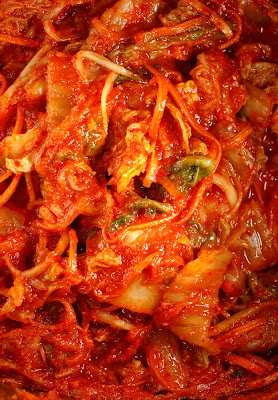 There was one more hurdle to jump before I could make my own kimchi: I needed some Korean red chili powder. I found some at the Asian Market on Summer at White Station and at the Winchester Farmer's Market. The bright red powder was in a huge bag at a cost of $10, but it didn't look like I had much of a choice. (Seriously -- e-mail me if you want some chili powder.) In the end, I was really glad that I shelled out for it because it made my kimchi taste authentic.

At home, I sliced into the fruit to see what it tasted like before I ground it into a chili paste. I would describe the texture as a cross between a crunchy apple and a Bartlett pear. The flavor was similar to honeysuckle on a summer's day. If you can't find a Korean pear, an asian pear would likely be a good substitute. Use this kimchi on rice, in soups, folded into a quesadilla, or on my Korean BBQ sliders.
Vegetarian Kimchi

Wash cabbage and chop into 1-inch pieces. Place cabbage into a large bowl and toss it with salt. Allow the cabbage and salt mixture to sit for at least an hour and a half.

While you are waiting, you can make the chili paste. Place the ginger, garlic, pear, chili powder, Vegetarian Fish Sauce, and sugar into a food processor. Blend until smooth; you may need to add a few tablespoons of water to get it going. Set mixture aside.

Now fill the large bowl with the cabbage in it full of cold water and rinse the salt off of the cabbage. Do this twice. Squeeze as much moisture out of the cabbage as you can using your hands. In a large bowl, toss the cabbage together with the garlic/ginger/chili paste and the carrots and radish until every component is throughly coated with the red paste. Taste for seasoning and add salt and Sriracha if needed. It should be about as salty as a dill pickle and as spicy as you can handle it.

Place into 2 quart jars by pushing the ingredients and packing them down tight so that the liquid rests on the top. Leave about an inch of space at the top of the jar. Add a few tablespoons of water to the top if needed to submerge cabbage. You may use it just like it is or ferment it for a more authentic taste.

To ferment the kimchi, loosely screw the top on the jars and place jars on the countertop for 3 to 4 days. During this time you will notice some bubbling. This is a natural process called lactic fermentation, a method of food preservation used before refrigeration that results in a lemony flavor almost like Sprite, the soft drink. At the end of the fermentation period, screw the lids on the jars and place in the fridge. Kimchi will last 6 weeks as long as the cabbage stays below the liquid level. 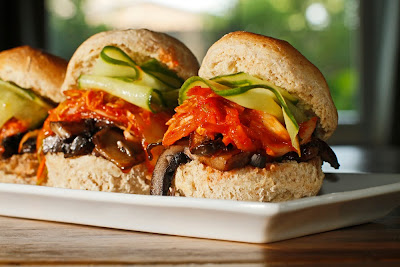 Get a frying pan screaming hot, and add the vegetable oil. Once it starts smoking, add the sliced mushrooms and cook for about a minute or until they start to brown. Turn the mushrooms in the pan and add the soy sauce mixture and the green onions. Continually move the mixture around for a few seconds then remove from heat. Divide mushrooms among the buns, and top with about a tablespoon of kimchi and a few slices of cucumber. Add mayo if you like. Serve immediately.

Who would've thought a pear is what makes kimchi. Great looking sliders.

I was JUST looking for a kimchi recipe that didn't use fish sauce. Thank you for this! :-)

I just slid of my chair a little with excitement. This is ducking beautiful.

I like spicy foods. Maybe that's why I fancy Korean Cuisine. I haven't tried any Kimchi recipe before because it takes time to make it according to recipe blogs out there. Thanks for sharing this recipe. I'll definitely make one for our Korean Night before I get my Food Safety Training.

Have you ever made this ahead of time and served it later?

brooke. Yes! Kimchi is at its best after about a week.

Thanks for sharing your amazing tips and ideas. My kimchi worries were over when you gave instructions for the paste. Please send me some of that exotic Korean chili powder :) Be well.