Like the Oyster Mushroom Rockefeller, I thought it would be fun to continue the play on words. Here beluga lentils stand in for beluga caviar in this classic Russian dish. My blini are tender and light, so they make a great canvas for the other flavors. 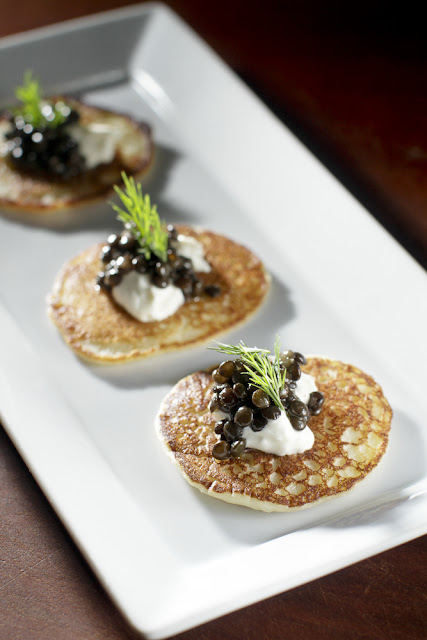 The beluga lentils are flavored with kombu, which is dried seaweed. It seems like a strange ingredient, but it's available at Whole Foods. It tastes like the sea. That along with the sea salt is fairly convincing.


This is a great dish for your holiday party -- or just serve it along with a salad for a light meal.


To assemble the dish, top each blini with about a teaspoon of créme fraiche followed by the same amount of beluga lentils. Garnish each with fresh dill and black pepper.

1 1/2 cups roughly chopped potato (about 1 medium one)
1 teaspoon water
1 tablespoon butter
1/2  cup all-purpose flour
1 pkg rapid-rise yeast
1/2 teaspoon salt
1 teaspoon sugar
1 egg
1 cup buttermilk
canola oil
Cover the mixture and set aside for thirty minutes to allow it to rise. Adjust the thickness as needed using up to 1/4 cup of water. You want it to be as thick as, well, pancake batter.

Place potato, water, and butter in a covered, microwave-safe dish and microwave on high for six minutes. In the meantime, mix flour, yeast, salt, and sugar in a large mixing bowl. Also in a small mixing bowl, mix the egg and buttermilk. Run the potato through a ricer and into the large mixing bowl with the flour. Now, using a whisk, mix the wet ingredients with the dry.
In a 12-inch skillet over medium heat, heat one tablespoon of oil. Once the oil starts to shimmer, add batter a tablespoon at a time to form small pancakes. (You will fit about five pancakes in the pan at a time.) Allow blini to cook for 2 minutes per side. Cook in batches, adding a tablespoon of oil to the pan if it looks dry. 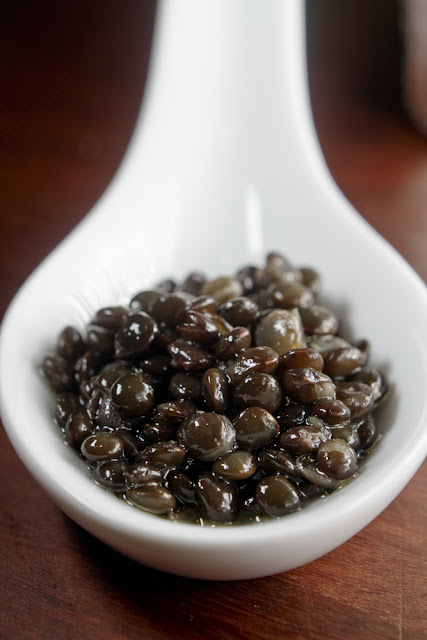 Add water, kombu, lentils, and salt to a saucepan. Bring it up to a boil, and then allow it to simmer, covered, for 20-25 minutes or until tender. Allow the lentils to cool in the liquid. Remove kombu and discard. Drain lentils and then add the olive oil. Serve at room temperature.

Posted by The Chubby Vegetarian at 9:53 AM

I love how beluga lentils look like little fishy eggs. They're just cute!

I was thinking the same thing! Totally looks like caviar. Good job!

Looks delicious! Need to try this! thanks for the recipes!

Oh my God, I was looking for a vegetarian blog that had great appetizing photos and food I would actually be interested in eating. Guess I found it. Great pictures!

This was SO good! I thought the potatoes in the blini were a tad weird when I read the recipe but everything works so well together! This is now my go-go fancy veggie appetiser. Thank you for the recipe, Chubby Vegetarian!