You have to meet my friend Bianca Phillips. She runs an all-things-vegan blog brimming with personality called Vegan Crunk, and she is the author of a cookbook aptly titled Cookin' Crunk: Eatin' Vegan in the Dirty South, which is due out at the beginning of next year. The book, like the blog, will take traditionally meat-heavy Southern American recipes and veganize them. I can't wait to get my hands on a copy.
Knowing how much I love vegetables, Bianca created this red lentil recipe just for The Chubby Vegetarian. It's delicious. For dinner the other night, I made her red lentil stew and some upma, Indian spiced cream of wheat, by taking instant cream of wheat and adding a pinch of coriander and a few cardamom pods. I served the stew over the upma with cilantro and lemon slices.
Here's Bianca... 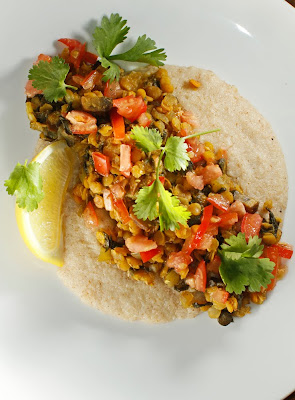 Can you believe I'd never tried red lentils until last year? I've always had a fondness for brown lentils, served Indian-style with lots of curry powder and cumin. But I guess I'd just assumed red lentils would be the same, so why try them? How wrong I was! I first had them in a red lentil stew by vegan cookbook author Sarah Kramer, and the recipe was uber-delicious. I love how red lentils break down and get all mushy, instantly making your soup into a stew. I also love how quickly they cook. You can throw those suckers in a pot of boiling water and have dinner on the table in 30 minutes -- try that with some other bean. Yep, only lentils cook so quickly.

This recipe also feature two of my favorite veggies: spinach and mushrooms. I throw them in just about any stew, and this one is no exception. Even though it's way too hot for stew by some people's standards, don't hesitate to make this anyway. Just sit in front of the AC while you're eating it.
Curried Red Lentil Stew with Mushrooms and Spinach
--------------------------
1 tbsp. canola oil
1 small onion (chopped)
2 cloves garlic (minced)
10 ounces button mushrooms (sliced)
2 tsp. curry powder
1 tsp. sea salt
1 tsp. cumin
3 cups vegetable broth (I used 3 cups water and 1 tablespoon red miso)
1 1/2 cups dry red lentils
1 10-ounce package frozen spinach, thawed and water squeezed out (I used fresh spinach that I blanched)
1 tomato, chopped
(I added a teaspoon of vinegar. -TCV)
Heat the oil in a large soup pot on medium heat. Add the onion and sauté for 2 to 3 minutes. Add the garlic and mushrooms and saute for 5 to 7 more minutes or until mushrooms begin to cook down and release their juices. Stir in the curry powder, salt, and cumin, and sauté for one more minute.

Add the vegetable broth, lentils, and spinach. Bring to a boil over high heat. Lower heat and cover. Simmer for about 20 minutes or until lentils are tender. Stir in the tomato and simmer for another 5 minutes.

Posted by The Chubby Vegetarian at 8:21 AM

Love red lentils!! Have you tried "The Indian Slow Cooker" book by Anupy Singla?? It has a ton of EASY & cheap vegan recipes in it. With lots of new types of legumes!

Yea!! So glad you liked it, and I bet the vinegar does add a nice touch. I like to add a splash of vinegar at the end of cooking sometimes. I wanna try your umpa!!