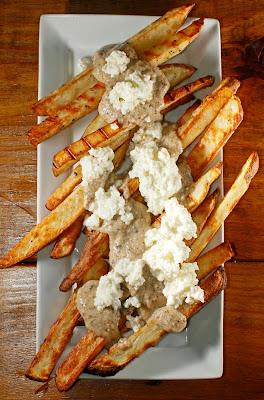 Poutine is the Loch Ness Monster of dishes around our house: we have heard of it, we knew about it, but we had never witnessed it for ourselves. Our friend Katelyn from Canada would wow us with stories about this mythical dish. We'd plan to make it (I'll bring the gravy, and you bring the fries!) but it just never happened...until this week.
My wife said the magic word, poutine, three times, and the dish magically appeared on our table this weekend. What is poutine, you ask? It's three simple ingredients thrust together to make something that is far greater than the sum of its parts: french fries, gravy of some sort, and cheese curds. That doesn't sound like something I would make! Well, it isn't, but we all have to be a little bad sometimes. Besides, I made this as healthy as possible: the fries are baked with only two tablespoons of oil, and the gravy has only one tablespoon of butter. Now that I have witnessed it firsthand, I can tell you without a doubt that we will be making this one again.
Vegetarian Poutine: Crispy Baked Fries, Truffled Gravy, 1/2 cup Cheese Curds 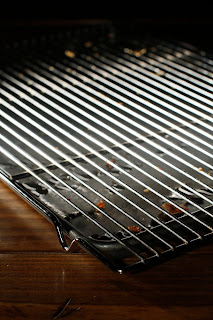 Crispy Baked Fries
2 medium baking potatoes
1/2 teaspoon sea salt
1/2 teaspoon cracked black pepper
2 tablespoons cornstarch
2 tablespoons all-purpose flour
2 tablespoons canola oil
(The cornstarch in this recipe makes for a crispy crust even though these fries are baked and not -- gasp! -- deep fried.)
First, cut potatoes into 1/8 inch sticks; be sure keep the skin on them, though. Toss potatoes with the salt, pepper, cornstarch, and flour. Next, toss them in the oil. Immediately arrange them in a single layer on a baking pan fitted with a cooling rack; this technique allows airflow all around the potato, which yields a crispier french fry. Place into a 515 degree oven for 10-15 minutes or until brown. Remove and serve immediately.
Truffled Gravy
1 tablespoon truffle butter
1 teaspoon all-purpose flour
1 cup whole milk
3 tablespoons shiitake mushroom paté
2 dashes of hot sauce
Melt butter in a frying pan over medium heat and add the four. Whisk until mixture turns a pale brown. Whisk in the remaining ingredients, raise the heat, and stir until thick. Set aside.
To assemble: throw a handful of hot fries down onto a plate, top with a generous helping of gravy, and then pile on the cheese curds. It's good...really good.
Posted by The Chubby Vegetarian at 8:38 AM

Where did you find the cheese curds? Oh, and brunch was wonderful yesterday!

click the link that says cheese curds. I have instructions on how to make it at home. You won't need the cheesecloth or anything. Just pull the curds from the whey and throw'em on top of the fries.

Thank you for coming to brunch. I would have felt overwhelmed without the support of my family and friends.

Sorry I missed the brunch.

Poutine is one thing that definitely needed to be vegetarianized. Nice call!

Just so you know next time you visit Canada, try out the poutine at Burger King. It is not fancy but it is soooo soooo good. And remarkably, also vegetarian. As a Canadian living in the USA I miss poutine and think about it regularly, incidentally, most poutine is made with poutine sauce, not gravy. And it does taste different.
Gonna try your recipe for cold oil fries. I am super excited.

I've never had poutine, as I've been partially veg for many years before poutine became a sensation in the US, and I'm thinking of trying your awesome recipe. I love it that everything (even the cheese curds) are from scratch - my kind of recipe! Have you tried any of the other veg poutine gravies to be found online, with soy sauce and/or mushrooms as the main flavor component, and if so, how did they stack up to your gravy? I'm curious, since I've never tried *any* poutine... Thanks!

Thanks, EE! We have not made any other gravy recipes with this. People say they could drink this particular Truffled Gravy we dreamt up here, so we figure that is a good endorsement. We are from the South, so our idea of gravy may be a bit, well, indulgent...

Let us know how it turns out of you make it!