I needed some way to know for sure who is gonna win the Super Bowl. I have very few allegiances in the sports world, but this game is super-important to my buddy Aaron, who is a rabid Steelers fan. The outcome will likely predict his mood for the entire month of February (and maybe a bit of March). 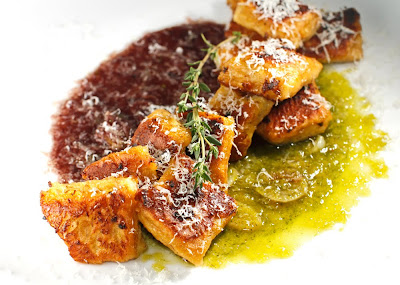 There is only one sure way to predict the winner. I made two sauces: a black olive and white wine reduction (for the Steelers), and a green herb oil (for the other team). I poured each onto the plate at the same rate and watched to see which sauce took most of the surface area of the plate. It was an exciting contest with plenty of touch-and-go moments. Both sauces gave it 110%, and when it was over, they left it all on the plate. I'm happy to report that the black olive sauce won handily over the green herb oil in the end.
Posted by The Chubby Vegetarian at 7:44 AM

Now that is a super bowl, I mean super plate!

YES! I gotta just say that the black olive sauce went out and buckled its chin strap, brought its lunch pail, played some smash-mouth football, finished strong, and brought a victory home for the fans, who are the best fans in the world.

Also, the offensive line did a great job.

I eat the food, that is the winner here but GO PACKERS nevertheless

OOOOO! I am salivating! Simple, yet so pleasing :)