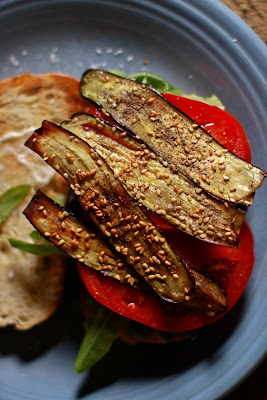 Hardly anything is vegan. I went to make a trusty BLT for lunch the other day with Morningstar Farms Veggie Bacon, a product I have relied on for years, and discovered that it has egg whites listed as the first ingredient. Since I committed to VB6, the Veggie Bacon was out of the question. I already had the rest of the sandwich made: The bread was toasted, the tomato sliced, the avocado cut and smashed onto the bread with a fork. I had to think quick. I spotted a few baby japanese eggplant in my fruit bowl that my buddy Andria gave me. That would do, I thought.
2 small japanese eggplant
1 tablespoon olive oil
1 table spoon sesame oil
sesame seeds
Braggs
I sliced the eggplant thin on the mandolin, and pan-fried them in a tablespoon of olive oil and a tablespoon of sesame oil. Just before they were crispy, I hit them with a few drops of Braggs and a sprinkling of sesame seeds. I transfered the eggplant to my waiting sandwich, closed the top, and took a bite. It was better and fresher than the processed stuff.
Posted by The Chubby Vegetarian at 4:09 PM

I don't care for their tone (basically what's sold their books!), but you may want to pick up the Skinny Bitch cookbook.

Basic but very good on spelling out vegan products and providing ideas for dishes.

I really appreciate this recipe! While I am just vegetarian (no longer vegan), I took a lot of things from being vegan, i.e., I don't like "fake meat" products. The tempeh bacon sort of falls under this heading for me too. So when I see a recipe where I can just use veggies for the "meat" I am all a-flutter!

i do love me some fake bacon, also know as facon in my house, but this looks great too!

Hardly anything is vegan? Dude, don't you have produce and farmers' markets near you? That's the only place I shop. ;) :D I read that someone can eat a different fruit each day for the rest of their life, as there are so many varieties. I prefer some local fruits and veggies, though.

have you tried tempeh bacon?