Long ago, my family would get BBQ for dinner at least once a month from The Germantown Commissary, a fixture in the old town square in the suburb where the wife and I both grew up. My standard order was a bit strange for a kid: I'd always order a salad. Granted, this was a huge salad by the name of the "Boss Man" that was covered in pulled pork and served with a thick ranch dressing. It was, to my nine-year-old self, heaven. 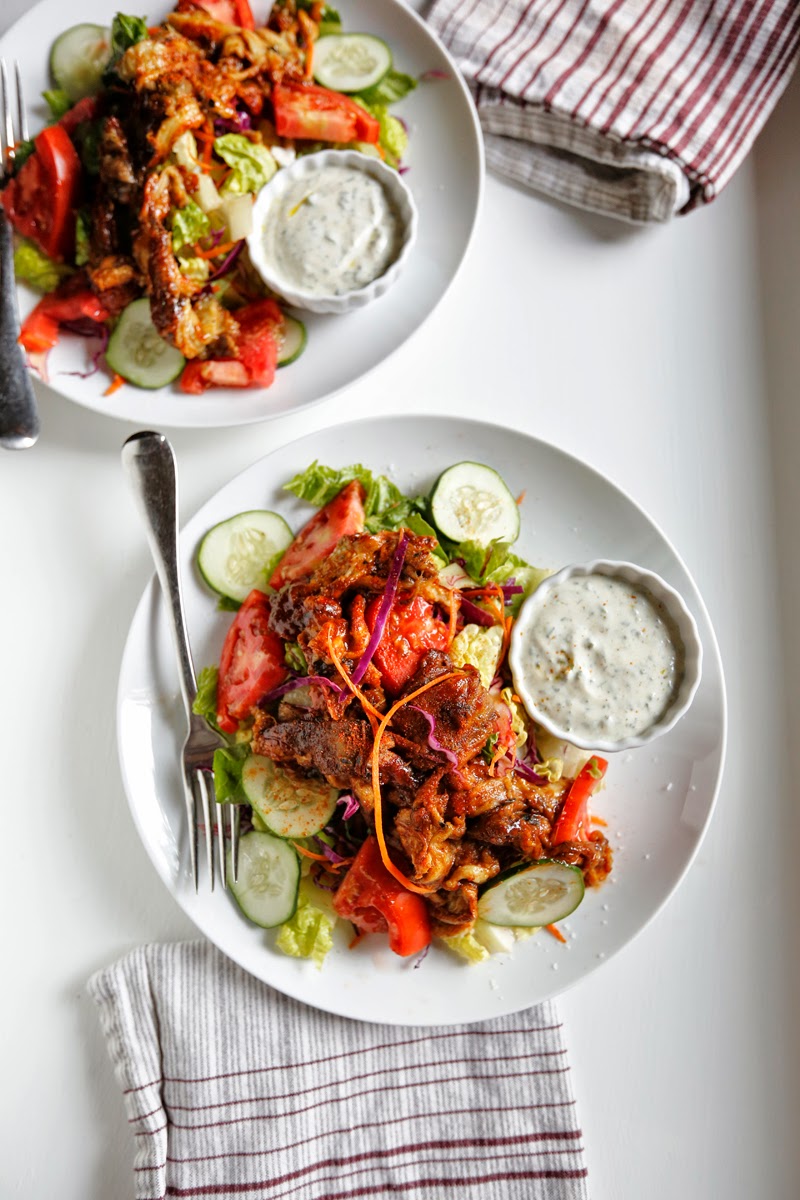 I wanted to figure out a way to celebrate that dish, but update it for how we eat now. We have no shortage of BBQ recipes on this site, and any of them might work in place of the eggplant. I'm thinking that the portobello mushrooms or the artichoke hearts could work just as well.

The dressing, made with tangy yogurt, would be good on anything. The result of the mixture of crunchy lettuce, smoky eggplant, and rich dressing is our take on a Memphis classic that's big enough to be the boss.

Preheat your outdoor grill to high. Prepare the eggplant by slicing each in half longways, then cut slits in the flesh of the eggplant every 1/4 inch; cut through most of the flesh, but not the skin.

In a medium bowl whisk together the olive oil, sesame oil, and vinegar. Drizzle each eggplant half with the oil and vinegar mixture. Apply The Chubby Vegetarian's Signature Dry Rub liberally to each eggplant.

Place eggplant skin-side-down on the hot grill and close the lid for 20 minutes. Remove eggplant and tent with foil. Allow it to cool so that you're able to handle it.

While you're waiting for the eggplant to cool, prepare the salad by tossing together the romaine, shredded carrot, shredded cabbage, cucumber, and tomatoes. Prepare the Yogurt Ranch Dressing according to the recipe.

Now, using your hands, pull as much of the eggplant flesh away from the skin keeping the large strands intact. Discard the skin. Toss the eggplant with the warm BBQ sauce. Divide the salad among two plates (it's a big salad!) and top each salad with a heap of BBQ eggplant. Include the Yogurt Ranch Dressing on the side.

In a medium bowl, whisk together the yogurt, lemon juice, salt, pepper, dill, chives, parsley, and olive oil. Set aside in the fridge until ready to use. (Makes 3/4 cup of dressing.)

Posted by The Chubby Vegetarian at 12:33 PM

Yay!!! I grew up eating BBQ salads with ranch from a gas station in Jonesboro called Big Al's. Haha. I put my vegan version in my cookbook. It's made with seitan BBQ. But I'll have to try the eggplant version!!!

Yay! I grew up eating BBQ salads with ranch from a gas station in Jonesboro called Big Al's! I put a vegan version with BBQ seitan in my cookbook, but I'll have to try your eggplant one!

Welp, I have just made a batch of this dressing, and am very much looking forward to eating it on the roasted cauliflower & beet I currently have in the oven, and the simple salad that's going to go on the side! NOM.

Great inspiration! I grew up on meat so it's not easy to cut it out and eat healthier but after realizing that vegetarian food can be also tasty, I am slowly, step by step discovering the secrets of these unknown tastes. Actually, the global campaign of Meatless Mondays was one of the strongest motivations to eat less meat (I guess everyone interested in this lifestyle knows about the initiative but if not, I read about it here), so now I'm trying the first recipes and collecting the best ones... Looking forward to try your vegetarian BBQ salad (unfortunately without the yogurt dressing, I cannot eat it...)