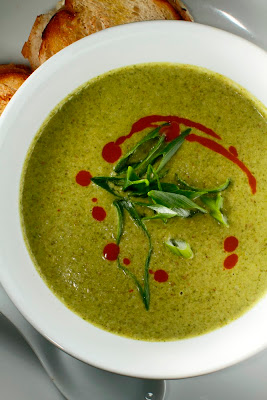 It's nice to see my girl Ruth Reichl land squarely on her feet. After Gourmet ended, I knew I would miss her, but now, I am glad to be able to watch her new series, Adventures with Ruth. I mention this because I saw her make a version of this soup on the show last week when she was in Mexico. I thought it was something really weird, something I'd never made before, so of course, I had to try it myself. Using cilantro as a base and not just are garnish -- what? Really? The result was surprising in that it tasted like a very flavorful cream of broccoli soup. Click HERE for her recipe. Below is my vegan version of the soup.
Cilantro Almond Soup
2 leeks, roughly chopped
1/2 cup toasted almonds
1 bunch of cilantro, blanched and shocked
2 tsp. flour
1 Not-Chick'n bouillon cube
handful of fresh spinach
1 tbsp. olive oil
juice of one lime
salt and pepper to taste
sliced green onions and Mexican hot sauce for garnish
Sauté the leeks in olive oil until tender, about 10 minutes. Next, push the leeks to the side of the pan and put the flour and tbsp. of olive oil in the middle. Stir to create your roux. Let it cook for 3-5 minutes to get rid of the raw flour flavor; you'll start to smell the toastiness that indicates a good roux. Add top of cilantro, almonds, bouillon cube, and spinach with just enough water to cover. Using an immersion blender, blend all ingredients until very smooth. For a more sophisticated soup, you can strain it, but I like it kind of chunky. Garnish with dots of hot sauce, a squeeze of lime, and thinly sliced green onions.
Posted by The Chubby Vegetarian at 8:48 AM

I saw that episode and was quite intrigued by the cilantro soup. The color of the soup alone made me want to try it. Thanks for reminding me to add that to my list!