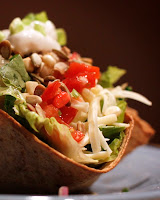 Taco salad night was quite an event at ye olde childhood Germatown home. My mom would get out the biggest pot we had, fill it full of vegetable oil, and put in on the stove. Once the oil was boiling hot, she'd float a flour tortilla in the oil. With a small metal bowl and a pair of tongs, she would press the center of the tortilla so it formed around the bowl as it crisped. Each one was a sculpture in oil and flour. It is a feat that I have never attempted. Never mind the fact that I avoid deep frying anything; I'm pretty sure I'd have one less house than I have now if I attempted such a thing.

So I developed a less-dangerous method of attaining a crispy bowl for my taco salads. Preheat your oven to 375 degrees on convection if you have it. Take a flour tortilla, brush each side lightly with olive oil, and then drape the tortilla over a small oven-safe bowl. Place it on cookie sheet, and pop it in the oven. It will stay in the oven for 7-10 minutes until it is golden brown. Keep a close eye on these because they can burn quickly. Take them out and let them cool. 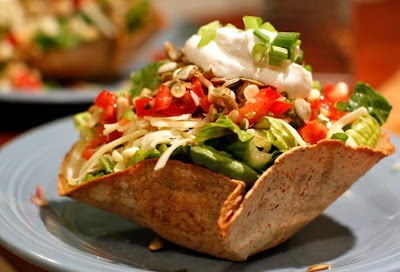 For the corn succotash:
1/2 pint grape tomatoes (quartered)
1 ear of corn (kernels cut off)
1 jalapeno (seeded and chopped)
1/2 small white onion (fine dice)
1 clove of garlic (minced)
juice of one lime
a few dashes of hot sauce
3 tablespoons olive oil
1 tablespoon white vinegar
Mix all ingredients in a medium bowl. Let this stand until you're ready to assemble the salad. Pour the mixture into a mesh strainer and reserve the liquid. This is what you will use to dress the lettuce. Now it is time to build your masterpiece. Start with a tortilla bowl, and then add some black beans in the bottom. Next up is the lettuce you tossed with the dressing, and then some cheese, followed by the spicy corn succotash, toasted pepitas, and sour cream. It's great with a slice of avocado or some guacamole and green onion. There are no rules here, people. Have fun with your own taco salad night this week.
Posted by The Chubby Vegetarian at 4:02 PM

Even better than oven-safe bowls, I'm pretty sure I have some of those little metal taco shell shapers that Suzanne insisted I take from her house at one point. (I told her no a few times, but ended up with them anyway. You know how that goes). I'll have to look for them...
-bianca

That sounds mouth-watering...but I have to admit I'm quite intrigued by the deep fry method!