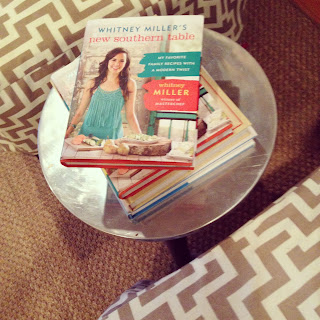 Whitney Miller's second cookbook, New Southern Table (Nelson Books 2015) was released this month, and we are so happy for her! Justin took the photos for the book, which is filled with re-imagined Southern classics and so many creative dishes we can't wait to make during the holidays. Whitney won MasterChef in season one, and soon after her victory, she wrote her first cookbook, Modern Southern Hospitality: Simple Recipes with Southern Charm, and traveled all over the world cooking up a storm and speaking about topics close to her heart.

Whitney, a native of Southern Mississippi, is currently in Memphis for the holidays with her awesome husband Ryan, and she's speaking and signing books today, Saturday, Nov. 28, at 4 p.m. at Booksellers. So come on out with us and meet our friend, get a book signed, and take care of a little holiday shopping at the best bookstore in town this afternoon!

We wanted to share a recipe from the book with you -- one that's representative of Whitney's modern take on Southern food. We already had a bunch of frozen blanched greens from the farm, so this was the perfect thing to make as a side dish today for lunch. (Except it looked so good that we actually ended up having it with tofu scramble and stewed tomatoes for breakfast!) 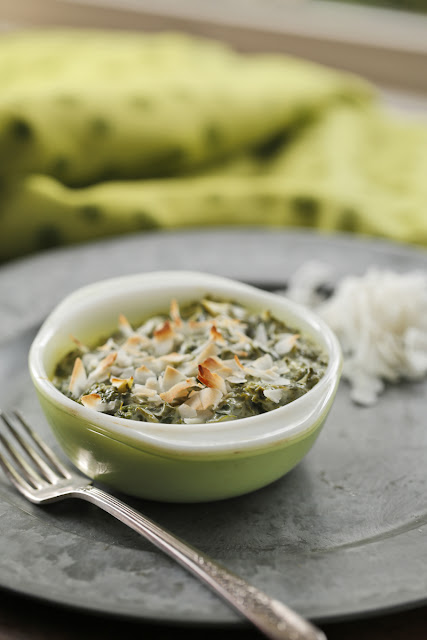 Transfer the greens to the bowl of a food processor. Pulse until the greens are broken down into chunky small pieces, about 30 seconds. Do not puree. Stir in the honey to cut any remaining bitterness from the greens. Pour into a shallow 8-inch casserole dish. Season the creamed greens with additional salt to taste. Sprinkle the coconut in an even layer over the greens.

Preheat the broiler. Broil the greens until the coconut is golden brown. Serve warm. (Makes 4 servings.)

Recipe courtesy of  Whitney Miller and Nelson Books, an imprint of Thomas Nelson.

Posted by The Chubby Vegetarian at 11:05 AM

YUM! I always fall into the same sauteed or slow-simmered rut with greens. I've never tried them creamed!! I need to make this.