We received free marshmallows from Chicago Vegan Foods in exchange for developing this recipe here on TCV. As always, all opinions expressed are our own.

This one is by request from our nephew G3. At dinner at Swanky's one night, he said we should make   crispy treat-type cereal bars for him soon and launched into great detail about them and how we should put them together. When we asked, puzzled, how he knew so much, he shrugged and said he read a recipe off his cereal box every day, and it sounded like a good, easy thing to make. 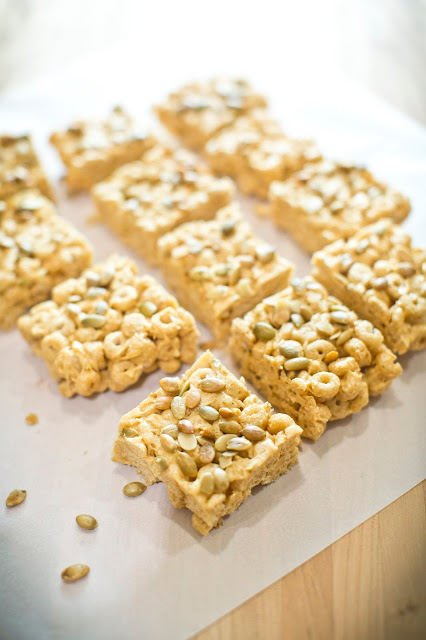 Love that kid! We got him hooked on our crazy style of trying-to-be-a-little-bit-healthier desserts at a young age. He really is the best dessert tester there is.

So we'd been talking to the folks at Chicago Vegan Foods this summer about their Dandies vegan marshmallows, and they recently sent us many bags of regular and tiny vanilla marshmallows to use; they'd seen our s'mores bar and shout-out to them here and realized we were fans of their marshmallow work. Many vegetarians are careful to avoid foods with gelatin since it's made from fish, so vegan marshmallows are a great thing for us.

Well, they also sent us an unmarked bag of their new pumpkin-flavored mini-marshmallows set to make it to shelves this fall, and Pumpkin Marshmallow Cereal Bars sounded like the best thing to do. G3 gets a few dropped off at his house this week for sure.

So on Sunday, we borrowed a kitchen from a family member who gave us free reign while she's out of town. Then we got back to our house and put waxed paper on top of a magazine as a makeshift cutting board. We washed our one knife under the water from the bathtub faucet so we could cut these squares all pretty. Counting the days until our new kitchen is complete -- maybe as soon as next week!

Place butter, pumpkin pie spice, and salt into a saucepan and heat mixture on medium-low until it's melted and bubbling a bit. Add marshmallows, stirring constantly so they do not burn. Once the marshmallows become one smooth mass, add the cereal and take the sauce pan off of the heat while mixing. Butter the bottom and sides of a square or rectangular pan. Once fully combined, press the mixture into the pan; you can use wax paper to press down. Press the pumpkin seeds into the top. (We like to sprinkle an extra hit of salt and pumpkin spice on top as well.) Let them cool and then cut them into squares.
Posted by The Chubby Vegetarian at 7:27 PM

Very delicious article.
Thanks for sharing.