Oh, this wonderfully simple, meaty taco filling made with spiced eggplant and mushrooms…sure, it's similar to our Mushroom Meat, but since it's cooked on the griddle and spiked with cumin and ancho chili, it's the perfect thing to fold into tacos, burritos, tamales and enchiladas -- just like you would do with ground beef. 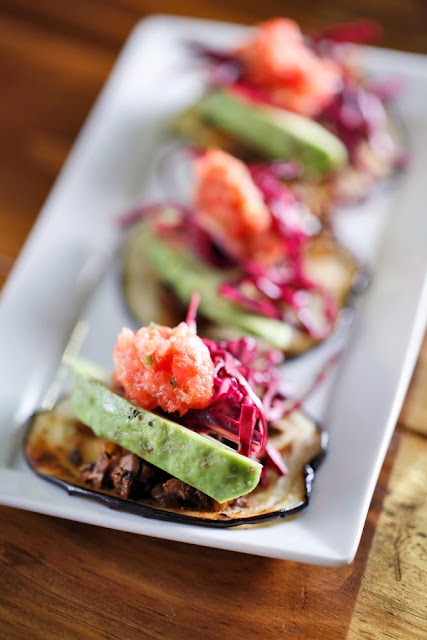 The dish has a tremendous amount of flavor, and the texture of the creamy avocado complements the crunchy slaw. I would totally make this as a party appetizer or for a casual dinner with friends.

Make the Red Cabbage Slaw and Simple Salsa according to the recipe and set aside.

Slice off the vine end and the bottom of the eggplant. Starting at the widest part of the vegetable, cut 15 1/8-inch rounds. These will be your tortillas. Roughly chop the remaining eggplant and add it to the work bowl of your food processor. Pulse in the food processor until the pieces are about the size of a black-eyed pea. Place chopped eggplant into a large bowl. Continue to chop the mushrooms and onions in the same way and combine with the eggplant, ancho chili, garlic, cumin, salt, pepper, olive oil, sesame oil, and sherry vinegar.

Place your long griddle pan, the one you usually make pancakes on, over high heat.  Sear the eggplant rounds for a few seconds on both sides until warmed trough and lightly brown. Set aside until ready to use. 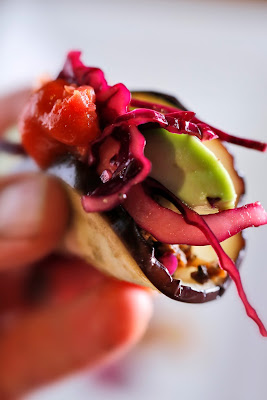 Dump the eggplant and mushroom mixture onto the hot griddle and spread it evenly. This step is key  in order to get the right texture of the dish. If you don't have a griddle pan, cook the mixture in batches in a large frying pan. Keep the mixture moving around the griddle until it appears dry and the onions have started to become translucent.

Set aside until you are ready to assemble the tacos.

To build an Eggplant and Mushroom Mini Taco, place 1 eggplant round on a plate, top with 2 tablespoons of the eggplant and mushroom filling, 1 slice of avocado, a little of the Red Cabbage Slaw, and a spoonful of Simple Salsa. Really, 3 to 4 tacos makes a whole serving, especially with a side of beans and rice, so this will serve 4.

In a medium mixing bowl, toss the cabbage, lime juice, salt and honey together. Allow it to sit for 20 minutes and up to an hour or so to allow the flavor to meld and the cabbage to soften. (Makes 1 cup.)
Posted by The Chubby Vegetarian at 4:36 PM

Too cute! Using eggplant rounds as "taco shells" is genius. And I always think it's funny when paleo food and vegan food overlap.

Dominex Eggplant Cutlets are great to use with these kind of recipes too.

Can I just chop the whole eggplant and use your recipe for plaintain tortillas for the torrñtillas?