Anjali's Red Bean Pudding (from Stir It Up! by Ramin Ganeshram)

A novel with recipes included = a super-fun read. There are so many great things to make in Stir It Up! by Ramin Ganeshram -- click here for details and purchasing info.-- but this pudding especially intrigued me; I've tried red bean ice cream at Sekisui Pacific Rim here in Memphis before and loved it but never had a pudding with kidney beans. What a cool thing to have in a dessert! 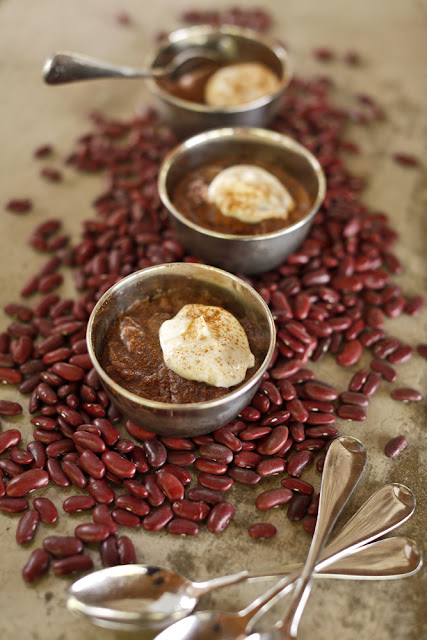 In the novel, narrator Anjali's family is from Trinidad but now lives in Richmond Hill, Queens. She cooks in her family's roti shop in  but also has dreams of sharing the food she thinks up herself with the world. She makes this pudding with her grandmother's help in a bittersweet scene that shows why we cook -- and how the results may not always get the reaction we expect.

Place the cassava in a saucepan, cover with water, and bring to a boil. Cook until fork tender, about 20 minutes. When the cassava is fork tender, drain it and set aside to cool. Rinse the kidney beans in a colander and place in a large saucepan with 1 cup water and sugar and bring to a simmer. Once the cassava is cool, cut it in half and remove the woody center. Chop into small pieces and add to the bean mixture. Allow the beans to simmer until the liquid is reduced by three-quarters. Pour the mixture into a food processor and puree until smooth. Return the bean mixture to the pan and add the coconut milk, mixed essence or vanilla, and nutmeg. Stir well and continue to cook over low heat until thickened further, about 5 to 10 minutes. Remove and place in a heatproof bowl to cool. Chill in the refrigerator. Serve in bowls with whipped cream and cinnamon for garnish.

Posted by The Chubby Vegetarian at 11:56 AM

Hello I love this idea and plan to try it. I was wondering if you've had a chance to try it?

Ok just a follow up. I made this and it was delicious and the longer it sat in the fridge the better it tasted! So thanks for the recipe