*Please VOTE HERE for TCV for TheKitchn.com's Best Recipe Blog award. This is the finals, y'all! Everyone is allowed one vote by 2/13; tell all your sweet friends!

Fish sauce is one of those ingredients that everyone seems to be using now. You see it in everything from cuisine to cocktails. The world has gone fish sauce crazy! So, what is fish sauce? It's made of tiny fish that are heavily salted and fermented in huge barrels for a year or more. The result is a salty, bacon-y, parmesan cheese-esque sauce that adds a ton of umami flavor to anything it touches. 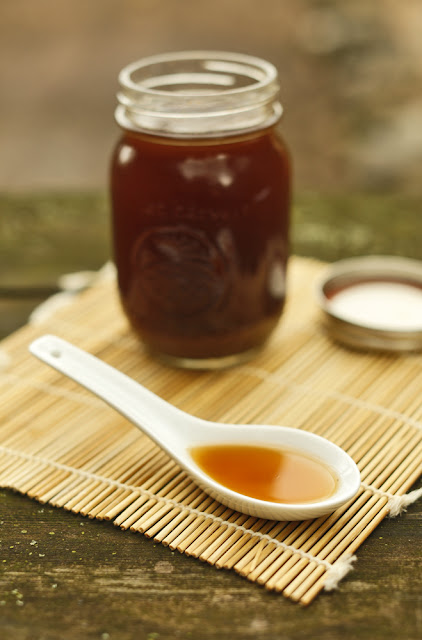 This fish-less fish sauce is perfect anywhere you'd normally use the fishy stuff and from all accounts it tastes pretty close. I first saw a version of it on a Chow message board. I've made some changes to that recipe over the year or so that I've been making my own vegetarian fish sauce. I like to keep some around to use in stir fry, Thai curries, kimchi, and salad dressings. It makes a great addition to stocks and soups that need a little umami bump.

In a medium pot over hight heat, bring the water, garlic, red pepper flakes, kombu, shiitake, soy sauce, sugar, salt, peppercorns, ginger, vinegar, lemon juice, and lime juice up to a boil, cover, and reduce to a simmer. Allow mixture to simmer for 25 to 30 minutes, strain, and return liquid to the pot. Reduce mixture to 1 pint. Allow mixture to cool and store in an airtight container in the fridge for up to 6 weeks.

Posted by The Chubby Vegetarian at 11:22 AM

Oh this sauce looks so delicious!

I am a little late to this particular party, but I just found this recipe today--after Googling "Uses for Thai Basil" so that I could make use of the beautiful but wilting bunch I picked up in my CSA this week. All the recipes called for fish sauce, and, well, here I am. I should add I also saw the Chow recipe, but I was put off by the hard-to-find ingredients (mushroom soy sauce?! I might find it at an Asian market, but it won't be organic and I try really hard to avoid genetically modified soy whenever possible).

I just finished making this sauce. Without waiting for it to cool, I added it to a thai basil pesto I made (peanuts, garlic, thai basil, cilantro, mint, garlic, lime juice, sesame oil, and, yes, vegan fish sauce). Wow. Just wow. I was eating the stuff out of my blender it was so good. My toddler is going to LOVE this stuff over brown rice spaghetti and with some tofu and veggies mixed in for good measure.

I have to say that, unexpectedly, this no-fish fish sauce just smelled sort of...well, good. As a convert to vegetarianism I've cooked with (and, consequently, smelled) the real thing--no comparison. Now, as I've never had Thai basil pesto before, I can't speak to compare this vegan version with some made from real fish sauce, but, as I said, this was darn tasty. I now have a whole jar of your no-fish fish sauce in my fridge, and I'm REALLY looking forward to finding a use for it.

I should add I made a couple of necessary variations: No dried shitakes at my Whole Foods so I went with dried portabellos (not my fault--the internet told me to do it!). I didn't measure, but just used the whole clamshell package (I think it may have been less than called for in the recipe--sorry, but they were $6.99 a package). I also used Tamari instead of traditional soy sauce (basically the same, but no gluten).

OK, enough rambling. Mostly I just wanted to say THANKS for this recipe, and encourage anyone else who stumbles on this page to give it a try. I always pay more attention to recipes that have at least one positive vote. I plan to look around at your other recipes, too. Hopefully there are a few that call for this condiment, as I've got loads of it...for the next couple weeks, anyway. Thanks!

I looooovvveee!!!! this recipe. I also tried the Chow recipe, but this is much stinkier! :)

Love this! I had been using the version with mushroom soy sauce, it was fine, but I was never completely satisfied. I never bothered to look further until now. This has a nice flavor profile, plenty of umami goodness, and is not overpowered by soy. So good, thanks for posting.