While jumping way far ahead and skipping Christmas supper (don't worry, we'll come back to it!), we have to tell you that we decided that this Black-Eyed Pea and Collard Greens Quiche would be the perfect dish to serve on New Year's Day whether you are just bumming around the house or hosting friends and welcoming in the new year. You see, we Southerners always have black-eyed peas on New Year's Day because they bring both good luck and money. How's that, you ask? In the dead of winter, as a new year begins, having a peas is a symbol of plenty, and the greens represent money, cash, smack-a-roos. It's an old Southern tradition that I've never strayed from. But most of all, we eat black-eyed peas and greens on New Year's Day because our grandmothers told us to, and I for one ain't arguing! 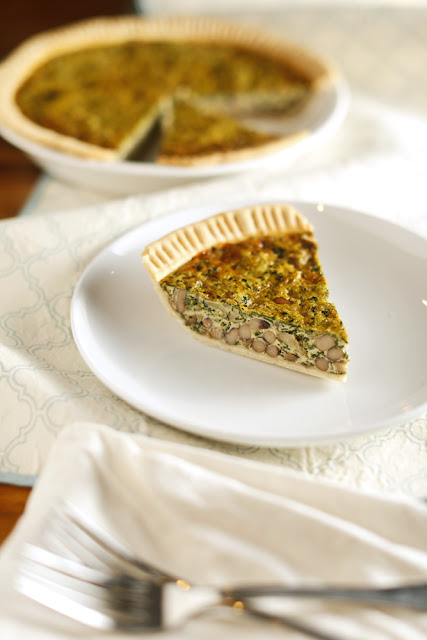 You can make this a day or two ahead of time and keep it in the fridge for a relaxing first day of 2013. Serve this alongside some of our freshly made Jalapeño and Smoked Cheddar Cornbread and a simple salad. Everyone will want to be at your house next year.


Make the pie crust dough according to the recipe and set it in the fridge to rest for 20  minutes -- or use a prepared pie crust to save time. Trim the leaves of the collard greens away from the tough stem. Toss the stems in the compost pile. Blanch the remaining green leafy parts in super-salty water for about 2 minutes until they turn bright green. Remove greens from the pot and run cold water over them to cool them down. Squeeze all of the liquid from the collards. (Be diligent! You don't want soggy greens to weigh down your quiche.) Using a food processor or a sharp knife, mince the greens until very finely chopped.

Preheat the oven to 350 degrees. Roll out your pie crust and fit it into a 10-inch pie plate. Cut off the excess using kitchen shears, mark the edges with a fork, and dock the bottom of the crust with the tines of the fork. Par-bake the crust for 10 minutes. Then remove crust and set aside to cool until ready to fill.

Heat a 12-inch skillet on high heat. Add butter; immediately after it's melted, add the mushrooms and onion. Continue to cook on high heat, stirring often, until the onions have softened and are starting to brown. Remove the pan from the heat and stir in the soy sauce, liquid smoke, and brown sugar. Allow mixture to cool.

In a large bowl combine the cream, milk, and eggs. Add to that the greens, mushroom and onion mixture, black-eyed peas, pepper, and salt. Pour mixture into the par-baked pie crust and bake for 40 minutes or until the center puffs us. Allow quiche to cool. Slice and serve. (Makes 8 pieces. Serves 4-6 people.)

Posted by The Chubby Vegetarian at 6:22 PM

What a great idea, to put your peas'n'greens in a flan! I love the symbolism, too- I'll definitely be serving up the greens in my house come New Year!