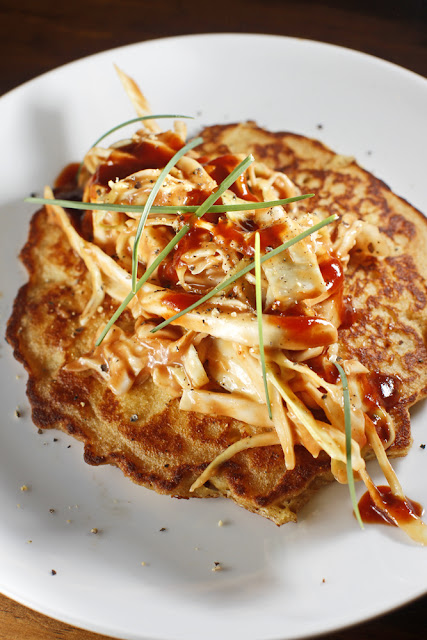 I'm so excited to present to you a recipe from Jason Quinn of the Lime Truck. As you may know, The Lime Truck won the second season of The Great Food Truck Race. This dish was one they served as a part of a vegetarian challenge in Memphis, and this week, Jason was kind enough to share the recipe with me.

The concept is simple but creative, and their execution is always spot-on. I could totally see making miniature versions of this dish for a party and serving them like little Southern blinis.
Corn Cake

2 tablespoons butter
Mix the creamed corn, pancake mix, eggs, and milk until just combined. Do not overmix. On a non-stick griddle over medium-low heat, melt a pat of the butter. Spoon about 1/3 cup of the batter onto the griddle. Allow it to cook for about four minutes or until the top looks like it has set. Flip and cook another two minutes. Makes one dozen corn cakes.
BBQ Slaw 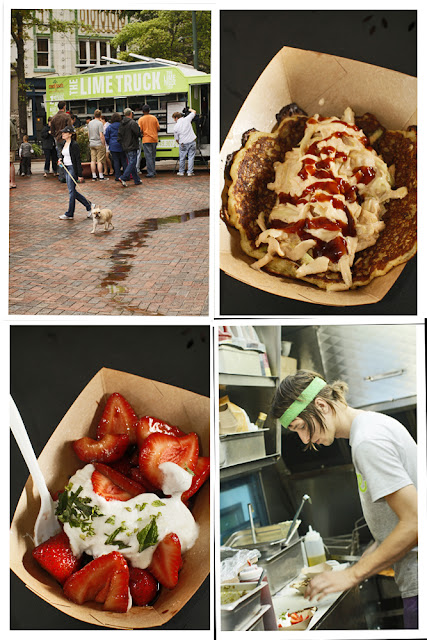 To serve, heap a corn cake with about 1/2 cup of BBQ slaw; garnish with chives and a touch more BBQ sauce. Eat it with a fork like a civilized person -- or pick it up like a taco as Jason instructed.
Creamed Corn*
1 tablespoon butter
1 cup onion (diced)
2 cups corn (cut away from the cobb)


1/8 teaspoon nutmeg
salt and pepper to taste
1/2 cup cream
Sauté onion in butter over medium high heat until onion is translucent. Add the corn and cook until the sugar in the corn begins to caramelize and some of the kernels begin to brown. Add the nutmeg, salt, pepper and cream. Set aside.
Posted by The Chubby Vegetarian at 8:38 AM

I am totally making the creamed corn part tonight and will try the rest another day - thanks for sharing the recipes!

This looks beyond awesome. Thanks for sharing! Loved them on the show. :)

Simple, yet elegant. I was so excited when the Lime Truck won the Food Truck Challenge. Your dish looks delicious. My son is a pancake nut and would be really excited about a dish like this. Thanks for sharing the recipe!