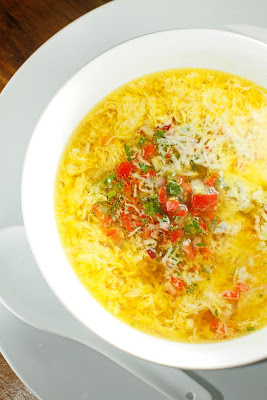 How did I get here, you may ask? How does one arrive at a Chinese/Spanish fusion soup? Okay, I'll tell you. I began by thinking about egg drop soup and how my family and I would go out to lunch after church every Sunday. Most weeks, we'd end up at Nam King on Summer Avenue in East Memphis. It was here that my dad would order something like deep fried chicken feet just to watch us all squirm; I would always order egg drop soup.
I was fascinated by the texture of the egg, and I loved the crunchy fried noodles that came on the side. The thing I remember most is the color of the broth: such a deep yellow it almost seemed like a cartoon drawing of what the soup should look like.
With this recipe, I wanted to recreate the color, and I did that by using saffron threads in the broth. This way, I felt like I had committed to a Spanish flavor profile replacing the crunch of the fried noodles with the crunch of diced vegetables.
The result was pretty amazing. This hearty soup is a must-try recipe for anyone who is looking for a little adventure. I think you'll love it.
Saffron Broth:
5 cloves garlic (crushed)
2 ribs of celery (roughly chopped)
1 red onion (roughly chopped)
2 carrots (roughly chopped)
1 Not-Chick'n bouillon cube
1 cup white wine
lemon zest
orange zest
6 cups water
1/4 teaspoon saffron threads
sherry vinegar
olive oil
salt & pepper
Over medium-high heat, pour 3-4 tablespoons of olive oil into a soup pot or dutch oven and add the vegetables. Next, add the bouillon cube and stir. Once the vegetables start to turn golden in color, add the white wine to deglaze the pot. Allow the mixture to cook until most of the wine has evaporated, and then add the zest, water, saffron, and about a teaspoon of sherry vinegar. Secure the lid and reduce heat to a simmer for 30-45 minutes. Strain the vegetables out of the broth. Return the broth to medium heat to reduce by about 20 percent. Add black pepper and salt as needed.
Saffron Egg Drop Soup:
red pepper
purple onion
green tomato
fresh parsley (or cilantro)
sherry vinegar
saffron broth
3 eggs (beaten)
manchego cheese
olive oil
salt & pepper
Finely dice equal amounts of the pepper, onion, and tomato and place into a mixing bowl. Finely chop parsley and add it to the mixture along with a pinch of salt, a tablespoon of olive oil, and a splash of sherry vinegar. Set this mixture aside; it is the garnish for the soup.
Bring the broth to a rolling boil. Add beaten eggs to the boiling broth -- one small spoonful at a time -- until all the beaten eggs are used. (This 'splintering' is really cool to watch!) To serve, spoon egg and broth mixture into a bowl, top with a spoonful of vegetable mixture, then grate a bit of the manchego on top.
Posted by The Chubby Vegetarian at 7:51 AM

Can we substitute white wine with something else??

white grape juice or apple juice could work. Just don't use any juice that is overly sweet.

oh my goodness! this looks amazing! i will definitely be trying this out.

I'm not a fan of saffron but that's a much better alternative than yellow food coloring. :)

I plan on making this either tonight or tomorrow, for sure! My mother will love it. :)

I wish there was a way to veganize egg drop soup. Actually, I'm sure if I googled, I find a recipe already veganized.

This looks so delicious. Thanks for the sharing this recipe. I might just have to try this!!

yeah that does look pretty good

It was my second visit to your site, but I admire time and effort you put into advancing it! I have enjoyed reading many of your articles, looks like you are a professional writer! Well done

Definitely not your typical Chinese Egg Drop soup but I'd love to try this out. Looks really good. :)