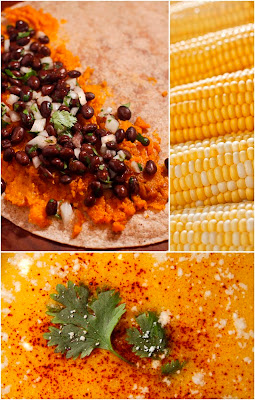 One of my favorite things in the world is a dish known as elote con mayonesa. It's Mexican street food at its best: boiled corn brushed with mayo, then sprinkled with cotija cheese, chili salt, and a squeeze of lime. I developed this chowder recipe with the same flavor combination. We really, really enjoyed it. This is something I will make again and again.
Corn Chowder:
8 ears of corn (boiled, cooled, and kernels removed)
1 onion (diced)
4 cups vegetable broth
1 chipotle pepper (minced
3 cloves garlic (smashed)
olive oil
chili salt (equal parts ancho chili powder and salt)
cilantro leaves
cotija cheese
lime wedges
Over medium high heat, sweat the onion in a few tablespoons of olive oil. Once the onion starts to brown, add the broth, pepper, and 3/4 of the corn kernels. Heat through and then blend smooth with an immersion blender. Strain the solid parts out of the soup using a mesh sieve. Return soup to the pot and add the remaining corn. Ladle some into a bowl and top with a sprinkle if chili salt, a touch of cotija cheese, a few cilantro leaves, and a squeeze of lime. 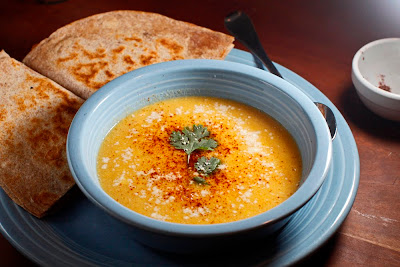 One of my favorite things about this blog is all the colour in your food.

I love Mexican food and I can't wait to try this recipe out. And I agree with the above comment, the colour in your food is great.