I have a vivid memory of my grandma, Biee, picking a few black eyed peas out of the heavy cast iron pot that sat simmering on her stovetop, and saying, "These have not touched the jowl; you have to eat them. It's good luck." She had no problem with me being a vegetarian, but she was concerned that if I didn't eat my black eyed peas on January 1, the whole year would be a disaster. We southerners are a superstitious bunch for sure.
I was curious about the origin of the black eyed pea tradition, so I asked around. No one seemed to know why we eat black eyed peas on New Year's Day, but at the same time no one dares to test fate by skipping them. I wanted to find out why. As usual, the internet held no complete, definitive answer, but I picked the one I liked the best to share with you here. Black eyed peas are a humble food, and eating them at the start of the new year reminds us to stay humble all year. 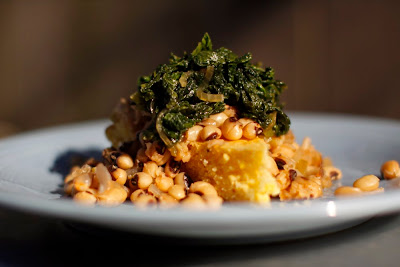 Here is a simple, hog-jowl-free way to make black eyed peas:
1 bag of dried black eyed peas (rinsed, quick soaked, drained)
1 white onion (diced)
1 green pepper (diced)
2 cubes of vegetable bullion (I like Not-Beef cubes)
2 tablespoons butter
3 slices veggie bacon (I like Morningstar Farms)
1/2 cup ketchup
water
salt & pepper to taste
Melt the butter in a large pot, and then add the onion & green pepper. Cook over medium-high heat until the onion is translucent, and then add the bullion cubes. They will melt into the veggies and impart a wonderful flavor. Add the peas, and then pour in just enough water to cover. Allow it to come to a boil and then reduce the heat to low. Add the whole strips of veggie bacon and the ketchup. Allow this to cook for about an hour before you try them; they get better the longer they cook.
We like to serve them over buttered cornbread and topped with sauteéd greens. The Wife made the cornbread out of one of our many Martha Stewart cookbooks; however she updated it by adding polenta to the mix instead of cornmeal since that is all we had. It gave it a nice texture. The mustard greens were sauteed in olive oil with onion slices, and then drizzled with local honey. It was humbly delicious. 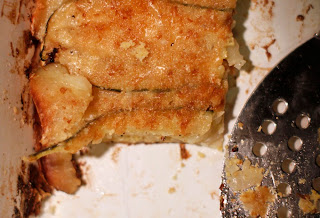 Bonus recipe: Squash & potato gratin
1 egg
1/2 cup cream
1 clove of garlic (minced)
salt & pepper to taste
1 1/2 cups gruyere cheese (shredded)
1 cup bread crumbs
olive oil
These veggies thinly sliced on a mandolin:
2 starchy white potatoes
1 yellow squash
1 zucchini squash
Preheat the oven to 400 degrees. In an oiled medium baking dish, begin to layer in your vegetables. Alternate between the squash and the potatoes until you've used all of them. Use a tiny bit of salt and pepper on each layer so the dish is evenly seasoned. Mix the cream, egg, and garlic together in a bowl, and then pour it evenly over the top of the veggies. Cover and bake for about 30 minutes. Uncover the dish, add the cheese to the top, then the breadcrumbs, and lastly, a drizzle of olive oil. Return the uncovered dish to the oven until the top is brown.
Posted by The Chubby Vegetarian at 12:51 PM

Just made it tonight. It was delicious. Even my two young sons loved the black-eyed peas and the cornbread, though they grudgingly ate the greens as well.