Contrary to what some might think, we don't always cook labor-intensive dishes from scratch. You know, we're versatile like that. This version of banana pudding is easy to assemble, and after making this type of dessert pretty much weekly for years, we have some opinions about how good it can be while still being fairly easy to put together. 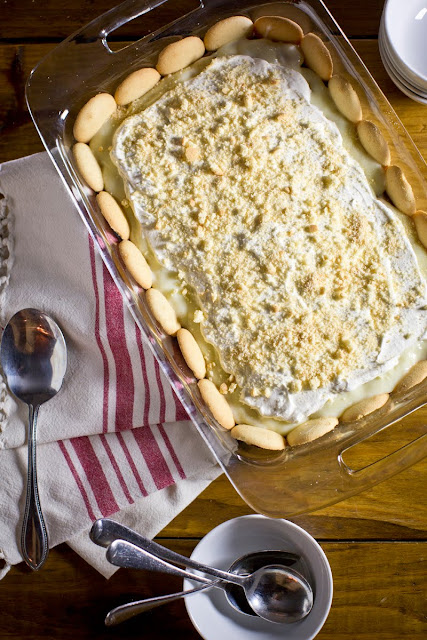 Banana pudding kind of has a lot of steps, so simplifying each one is key. We like European Gourmet Bakery Organic pudding mixes, and having both vanilla and chocolate on hand for this particular eclair-like / but no-real-eclairs-included idea makes the main part of the dish very simple and quick. Lately, were blown away when we tried GF vanilla wafer cookies by Kinnikinnick Bakery for the first time, and they're a staple in the cupboard now.

Layer it up and top it with homemade whipped cream, and you've got a killer dessert to take to a party in one of those handy insulated casserole carriers that seem like preparedness overkill but actually are pretty useful. Namely when you're transporting something and don't want to drop the contents of some flimsy aluminum pan onto the driveway once you get there (which has happened more than we care to discuss).

Hey, you can also browse some of our other takes on this dessert from years past on TCV:

Mascarpone Banana Pudding in a Jar 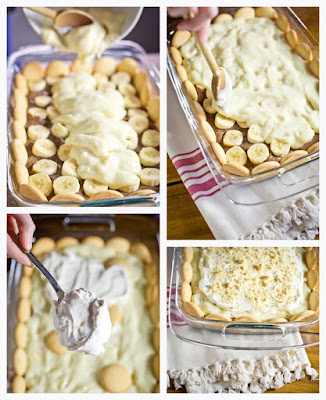 Make the puddings separately according to the package directions; however, for the European Gourmet Bakery brand mixes we like, we use the recommended 2 cups of whole milk per box but doctor it up a bit and also add beaten egg, 1/2 a teaspoon of salt, and a teaspoon of vanilla extract per box of mix before cooking.

While the two puddings are cooling, place vanilla wafers in a single layer on the bottom of a shallow casserole dish. Add a layer of chocolate pudding on top, add all the banana slices, and then top with a few cookies and the vanilla pudding. Top this with whipped cream plus some crushed cookies and a sprinkle of salt.


Posted by The Chubby Vegetarian at 4:03 PM