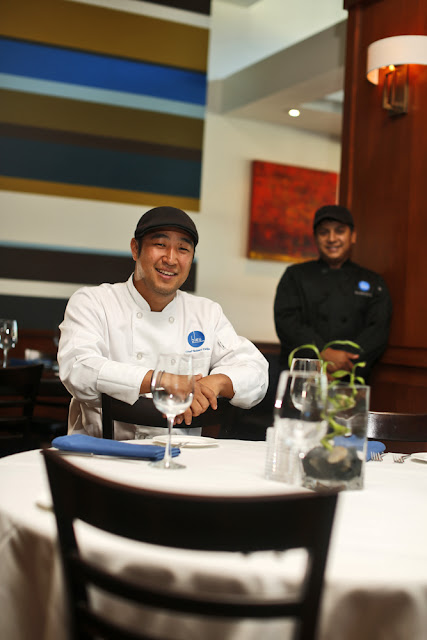 We were invited to dinner by the kind folks at Bleu Restaurant and Lounge in downtown Memphis in order to try a new vegetarian entrée on the menu. It's extra-firm tofu with a bulgogi marinade, which traditionally includes garlic, sugar, sesame oil, and soy sauce; it's grilled up and includes a vegetable stir fry. We also tried the edamame hummus appetizer, a pear and goat cheese salad with cranberry vinaigrette, and a spiced poached pear with candied pecans and ricotta -- a great vegetarian meal. We caught up with Chef Robert Cirillo back in the kitchen before dinner, and here's what he had to say.

1. TCV: I'm fascinated by your story: born in Korea and adopted and raised by parents who were first-generation Americans whose families were from both Ireland and Italy.  At what point did you reconnect with your Korean heritage?
RC: When my brother and I moved here from Korea, the adoption agentcy gave my parents a list of foods that they should keep in our diet...kimchi being number one. Kimchi is the oldest flavor I have in my memory base. We’d buy Golden King Kimchi and put it over rice. When I turned 21-22 and found out I really wanted to cook food, I did a lot of experimenting and learning how to cook things. It took at least 10 cases of cabbage before got kimchi down pat.

2. TCV: Has Memphis rubbed off on you personally or affected your cooking style in any way?
RC: If anything, it’s kind of relaxed me on approaching dishes. I try to do something that's different but still welcoming so people will come and try it out. The first ten items I did for a tasting for the new owners before we opened, and I thought it might be too weird for them, but they accepted it. I’m from the Northeast, so they knew it was going to be different. It’s my style but just a little more comfortable.

3. TCV: What ingredient or technique has your attention right now?
RC: Right now, at this very moment, it is venison. Down here, it felt like an opportune time to roll out an idea I had. I used it in Rhode I thought about all the things the white tail deer eat where I'm from, and it’s the same as gin. I used that to create the sauce: juniper, mustard greens, currants, crabapples. I do a hibiscus and a Hendrick's gin cream sauce, and then for the rub, I do juniper berries, currants, coriander, fennel cumin...earthy, right? I do rainbow Swiss chard and Granny Smith apples instead of crabapples. 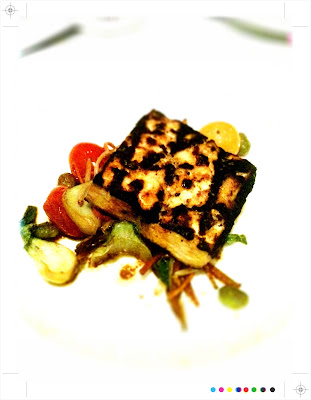 4. TCV: Why was it important to you to have a planned vegetarian entrée on the new menu instead of just having the typical "seasonal vegetable plate"?
RC: I don’t think it's bad or wrong to do that because it allows a chef to say, 'This is what I have, so this is what I'm going to do.' Marcus Samuelsson, for me, I think is one of the best chefs in America. His big thing now at Red Rooster is doing healthy stuff.  Quinoa is one of the best grains in the world, but that being said, tofu sucks in any flavor. We marinate and grill it which gives it a nice charred flavor and little sweetness with the bbq. We use a mire poix, and it's my base vegetable with barbecued tofu. It's actually moving, too, because there are people in Memphis who are loking for healthy food and we give them an option. So this was a smart dish for us to do.

5. TCV: Thanksgiving dinner: Are you cooking for the family or taking the day off?

RC: Hopefully, I'm throwing a turkey in a smoker two days prior. That’s my favorite holiday. All it's about is eating food all day with your family and friends and watching football, and you can’t go wrong with that.

Posted by The Chubby Vegetarian at 11:29 AM