We love it when people really enjoy the food we make.  We had family over this week and made this dish, and even a staunch meat eater was head over heels for it. The veg chorizo is similar to the texture of the real thing and would be good in a taco, burrito, in a taquito, with some Fritos -- even a incognito mosquito wouldn't veto this! 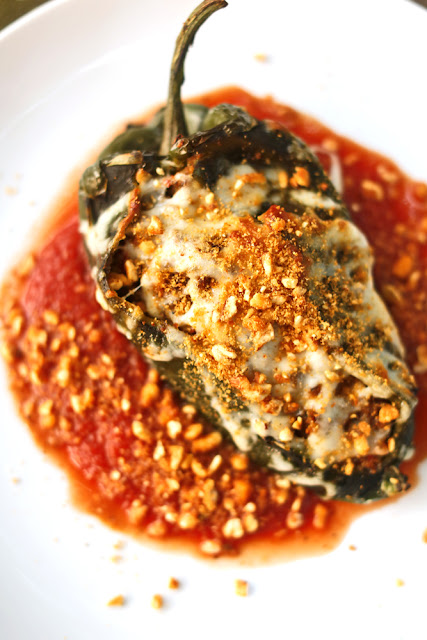 Okay, here's the deal with corn nuts: I was looking for a non-disgusting snack at the gas station when I was on my way out to Conord Farms in Slayden, Mississippi. I picked up the Corn Nuts and, much to my surprise, they only had three ingredients: corn, oil, salt. That doesn't qualify as health food, but it was the best I could do at the time. Turns out that they are super-crunchy and delicious. (Whole Foods carries their own even-better-than-the-original version of Corn Nuts in the bulk section.) They kind of taste like the masa used to make tamales. They were the perfect thing to add a little texture and crunch to this stuffed pepper dish.

Roast the poblano peppers until blackened on your outdoor grill. Place into a bowl and cover until they are cool enough to handle. Run each pepper under cold water to wash away the blackened skin. Make a slit down the length of the pepper using a paring knife, pull out the seeds, and set peppers aside until they are ready to be stuffed.


Preheat the oven to 350 degrees. Using your food processor, finely chop the onion, portobellos, bell peppers, and garlic in batches and place them onto a large parchment-lined, rimmed baking sheet. Add the vinegar, paprika, chili flakes, salt, coriander, cumin, and oregano. Using your hands, toss the ingredients to incorporate. Spread the mixture evenly on to the baking sheet and drizzle with the canola oil. Bake for 20 minutes.


In a large mixing bowl, combine the spiced vegetable mixture with the bread crumbs, smoked mozzarella, and the egg. Mix to incorporate. Stuff each pepper with a generous amount of the mixture. Place peppers into a large casserole dish, cover with foil, and bake them in a 350 degree oven for 30 minutes. Remove the foil, top each pepper with more cheese and return them to the oven, uncovered, for another 15 minutes.


To serve place a spoonful of enchilada sauce onto a warm plate, place the pepper into the sauce, and top with about 1/4 cup of the Corn Nuts dust. Serve the condiments on the side so everyone can add what they like.

Posted by The Chubby Vegetarian at 5:04 PM

Mmmm looks great. Don't think we can get get corn nuts in the UK, but think it would taste pretty good without.

yum! i bet that's delicious with corn dust! thanks for sharing!

This made my day.

Wow! I used to love non-vegetrarian chorizo, and have missed it. This looks like a great replacement!

I know this is a really old post, but I made these today using http://www.snydersofhanover.com/products/korn-krunchers/hot-chili-lime-korn-krunchers.html instead of corn nuts. It was super amazing. I love this site, so thank you for all your recipes.